The Indian cricket team has gone without a head coach since the end of the ICC Cricket World Cup 2015.

Former India captain Anil Kumble was on Thursday appointed as the new head coach of the Indian cricket team. Kumble, whose 619 wickets in Test cricket is a record for India and third highest overall in the history, played 132 Tests and 271 ODIs for India in a career spanning 18 years. In the past, Kumble has been involved as a mentor for IPL teams Royal Challengers Bangalore (RCB) and Mumbai Indians (MI). Kumble even guided RCB to IPL 2009 final. This will be the first full-time coaching assignment for the former Indian captain. Kumble outgunned big names such as Tom Moody, Stuart Law, Dav Whatmore, Ravi Shastri and many more to become India’s next coach.  READ: Kumble, Shastri, Amre: Who should be India’s next head coach?

BCCI’s recently-appointed president Anurag Thakur announced on the sidelines of the Cricket Conclave that Kumble has been named the Indian coach for the period of next one year. He also announced that the decision over the support staff will be taken in due time.

The next assignment for the Indian cricket team will be in West Indies, wherein they will be playing four-Test series in July-August 2016. The Indian team has a big season coming up after that, with as may as 13 Tests, 8 ODIs and 3 T20Is lined up. India will be facing Bangladesh, New Zealand, England and Australia in their cricketing season.

There was an intense battle for the role of India’s head coach, ever since the BCCI asked for applications. As many as 57 applications were received by the Indian cricket board, which included some of the biggest names such as Moody, Kumble, Shastri, former Sri Lanka and Pakistan coach Whatmore and many more. There were a few contenders from domestic Indian coaches as well, such as Pravin Amre and Lalchand Rajput (former Indian manager).

The Indian cricket team has gone without a head coach since the end of the ICC Cricket World Cup 2015, following which Duncan Fletcher’s contract ended. The team had the services of Shastri as the team director, but BCCI, fighting many battles outside was forced to keep pushing it further.

Kumble’s appointment also marks the end of the Indian infatuation towards overseas coaches, as it is the first time since the appointment of John Wright in 2000 that India have appointed a home coach. Before Wright, Angshuman Gaekwad was India’s coach. Following the exit of Wright, India witnessed an infamous tenure of Greg Chappell, followed by South Africa’s Gary Kirsten and then Fletcher. 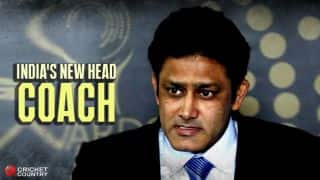