India came from 1-0 down to beat Australia 2-1 in the four-match series.

Dharamsala: India cricket team’s chief coach Anil Kumble on Tuesday said the riveting series win over Australia has proved that the current side is good enough to extend its home dominance to foreign shores as well. India on Tuesday chased down a victory target of 106 with consummate ease on the fourth day to beat Australia by eight wickets in the fourth and final Test and reclaim the Border-Gavaskar trophy. “It’s fantastic. We spoke about it that we will take one series at a time, one match at a time, one session at a time. To come back from 1-0 down, when you could see there were tired bodies around, it was brilliant,” Kumble said. FULL CRICKET SCORECARD: India vs Australia, 4th Test at Dharamsala

“After Virat’s injury the team stood up. [Ajinkya] Rahane led the team brilliantly after losing the toss. Then chasing 300 was a brilliant effort and yesterday the bowlers were brilliant. The fast bowlers throughout the season have bowled brilliantly. They bowled quick and the mind games done on the pitch that changed the way we approached the game,” he said.

“With this kind of line-up, with the lower-order contributions, I don’t see any reason why we can’t start winning abroad,” he added. Asked about the positives his side can take from the hectic Test season, Kumble said: “The positives have been adapting to conditions. We have had almost 25 players starting from West Indies. All 25 have stood up in different conditions. “Even the new home venues, we didn’t know how those pitches would behave. Everybody has put his hands up. The one area we need to improve is catching, that is something we have to look into.” READ: India trounce Australia by 8 wickets in Dharamsala Test to reclaim Border-Gavaskar Trophy 2016-17

Praising all-rounder Ravindra Jadeja, Kumble said: “Jaddu [Ravindra Jadeja] was brilliant through the season. [Ravichandran] Ashwin of course we know what he is capable of but Jaddu has always been in the shadows. But he has now come out of it and to be the No. 1 spinner is brilliant.” Pacer Umesh Yadav, who produced some fiery spells and returned with five wickets in the match, said he wanted to do something special for the team.

“I just told myself this is the last Test of the season and I have to show what I have got,” said Umesh. “Knowing this is the last game, I just gave it my all. was just trying hard to do something special for the team, special for me too. This kind of spells come rarely. Thankful to Sanjay Bangar bhai. He keeps telling me these are my strong points, and asks me to keep bowling there.” READ: IPL 2017: Virat Kohli could miss initial stages of IPL 10

Ashwin, who took three crucial wickets in Australia’s second innings, said: “Yesterday was really special. The game was in balance and Umesh blasted them away.” “I have been battling injuries in this series, thanks to the physio and the support staff to get me up.” Talking about his combination with Jadeja, Ashwin said: “Jaddu and I have been hand in glove all season. When we bowl in tandem, it has been great. Credit needs to be given to Jaddu, he gives me the cushion to try different things.” 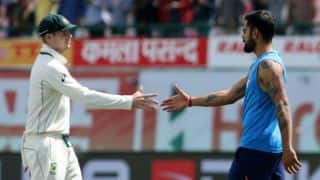 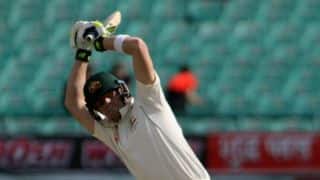