Anil Kumble likely to be elevated to Team Director’s role; may quit position of head coach

Anil Kumble likely to be elevated to Team Director’s role; may quit position of head coach

In the light of Kumble taking up the Director s role, there is a possibility of Rahul Dravid replacing him as the head coach of the national team.

In a major rejig, Team India head coach Anil Kumble may step down from his position and take up the role of Team Director. If a report from The New Indian Express is to be believed, the ongoing Border-Gavaskar Trophy 2016-17 could be Kumble s last coaching assignment. He may take up the role of Team Director as early as April 14. According to the report, Kumble met the court-appointed committee of administrators (CoA), who entrusted him with the job to file a comprehensive report on the senior, A side, junior as well as women s teams, soon after the second Test against Australia. The current decision-makers in BCCI, it is understood, are keen on structural changes.

The report quoted BCCI sources as saying that the board is planning a structure similar to the England and Wales Cricket Board (ECB), who have Andrew Strauss, the former England captain, as the Team Director. The CoA seems to have given Kumble time to decide on the offer as it would require him to devote more time than what he spends with the senior national team at present.

Apart from this change, the BCCI is also not keen on having the Cricket Advisory Committee (CAC), which currently has Sachin Tendulkar, Sourav Ganguly and VVS Laxman as members. Instead, if Kumble takes up the offer, one from the committee is likely to be entrusted with the responsibility of handling cricket operations of all BCCI teams.

We need to move ahead with the times and that is why these structural changes are looked at. If it happens, Indian cricket will benefit, as one person will handle all the teams and there will be better coordination between all concerned. The plan is already in place and there is a strong possibility that when new contracts are given out, these changes will be made, the report quoted one of the sources from the Indian cricket board saying.

Currently, MV Sridhar handles cricketing operations of the team and it is not clear whether he will continue in his role.

Also, in the light of Kumble taking up the Director s role, there is a possibility of Rahul Dravid replacing him as the head coach of the national team. Dravid is currently at the helm of affairs of the India A and Under-19 team. It is too early to say whether Kumble will take up the role or not. Being the coach and Team Director (with new responsibility) is no easy thing as it needs a lot of dedicated time. The amount of cricket we play might burn him out. If he doesn t, we need the back-up as we can t let the team getting affected, particularly with the Champions Trophy coming up, the source further added. 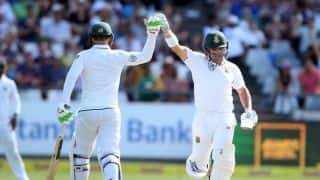