Tributes have been pouring since the time Rahul Dravid and VVS Laxman announced their retirements from international cricket. One of them has been long time friend Anil Kumble who said his stay and time with the team was made eventful by Dravid and Laxman. 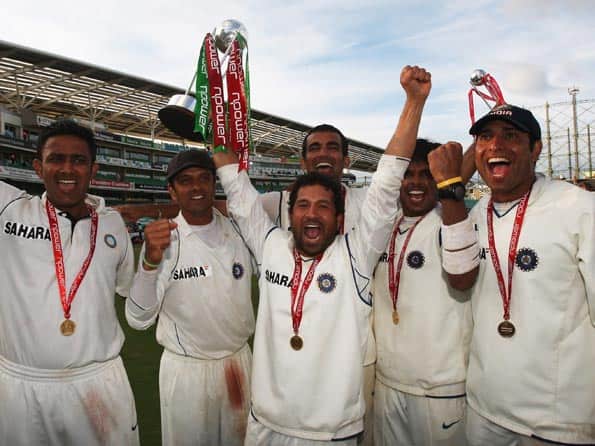 Tributes have been pouring since the time Rahul Dravid and VVS Laxman announced their retirements from international cricket. One of them has been long time friend Anil Kumble who said his stay and time with the team was made eventful by Dravid and Laxman.

“I shared a very good partnership with both Rahul and Laxman on the field and off it as well. We played cricket together for 15-16 years and shared a lot of time together, had meals together and had some happy moments,” said Kumble, who has taken 619 Test wickets, in which 81 catches has been taken by Dravid and Laxman.

“Rahul and Laxman were brilliant for me as close-in fielders. Most of the times, they knew exactly what I was going to bowl. I never had to discuss my bowling plans with them or instruct them particularly. At times, I told them if I wanted them to stand a bit straighter or wider, but mostly they were very precise in positioning themselves.”

Kumble expresses how he never had to tell Dravid or Laxman what will be the delivery and how the duo always expected a catch.

“For a spinner to succeed it s very important to have good close-in fielders and I was very lucky to have quite a few. Rahul and Laxman were among the best. They expected a catch off every ball. They weren t afraid to stand close to the bat and gave their 100 percent in the field. As a bowler the last thing you want is to worry about having a slip fielder who is not really alert. That was never on my mind. From the team s perspective as well, it boosts everyone s confidence if someone pulls off a half chance and changes the course of the game.”

Kumble shares how he used to get upset when any fielder used to drop a catch or misfield.

“I did, at times, put pressure on the fielders with my stingy attitude towards conceding runs. But it was all in the game and then you forget about it. It wasn t that I was the best fielder in the team. As a bowler you have a plan and you don t want the batsmen to rotate the strike. It s always easy for a bowler when he s bowling at the same batsman for longer periods so that you can set him up. If an easy single is conceded or a catch is dropped, you do get upset,” confessed Kumble.

Speaking about Dravid, Kumble said, “Rahul s concentration and focus was unbelievable. It was impossible for me to be that focused. And the amount of work that he put in, in order to prepare himself for a match, was really inspirational.”

While speaking about Laxman, Kumble spoke about the Hyderabad-batsman s positive attitude.

“What I liked the most about Laxman was that he was extremely positive no matter what the situation was. He never worried about how the pitch was and how it would behave. Everybody has their inhibitions and nervous feelings about certain types of pitches. If Laxman had any, he never expressed that in the team environment. He bailed India out of trouble on innumerable occasions with his positivity and calmness,” Kumble was quoted as saying by www.bcci.tv.

For Kumble, the way both of these stalwarts of Indian cricket retired has been inspiring.

“I really admire the way both, Rahul and Laxman retired they went out on their own terms, and I really appreciate that. Laxman could ve easily played the Test series against New Zealand and then gone on a high. But he never looked at things from a personal perspective. Both men always kept the team s interest above their own. When the two of them batted together, the dressing room would be totally relaxed. Rahul and Laxman will be sorely missed,” Kumble concluded.

Preview: Yuvraj Singh will be cynosure in India's first T20 against New Zealand