According to Kumble opener Shahid Afridi's dismissal was crucial.

On February 7, 1999, Anil Kumble became the second bowler in the history of international cricket after Jim Laker of England to take 10 wickets in an innings in a Test match. His spell of 10 for 74 at Firoz Shah Kotla destroyed Wasim Akram’s Pakistan. In 2014, on the 15th anniversary of this rare achievement, Kumble remembered his spell through a column in bcci.tv.

He started the column by writing, “A ‘Perfect Ten’ isn’t something you set out to achieve as a cricketer.” Pakistan were chasing a target of 420 to win to win the Test and the series. Kumble further explained, “Although the target was still a tall order, the onus was on us to break the partnership. I knew I had to raise my game. There was something that told us that it was a matter of taking one wicket. A new batsman would find it very difficult to get going on that strip, and we sensed that one scalp would put the cat among the pigeons.”

The spin legend also wrote, “Sachin [Tendulkar] did his bit to turn things around. He started handing my cap and sweater to the umpire at the start of an over, in an attempt to ‘bring me luck.’ He wasn’t doing that all the time, but it so happened that whenever he did that, a wicket fell!”

According to Kumble opener Shahid Afridi’s dismissal was crucial. “The floodgates opened with Afridi’s dismissal. I wanted to keep him as quiet as possible. He got a nick, and Nayan Mongia did the rest behind the wickets. The breakthrough had been affected.”

He also described how his teammates celebrated his achievement. “I will never forget how my team-mates rallied around me. Javagal Srinath was bowling at the other end when the ninth wicket fell. He bowled wide of the stumps. Obviously, he wasn’t bowling to take a wicket! Waqar Younis, the last man, went for a heave in that over, and skied the ball in the long-leg region. I don’t think Sadagoppan Ramesh, or for that matter, any fielder in the history of the sport, would have been shouted at by his team-mates not to catch the ball, when they were fancying their chances of going for it! ‘Sri’ was among those who shouted the loudest!”

This article was first published in the volume published by the Board of Control for Cricket in India (BCCI) to commemorate the Platinum Jubilee of Test cricket in India, in 2008. 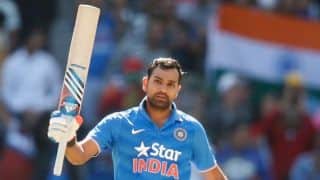