The Anil Kumble issue is not on the agenda for the SGM but it is likely to be raised by members.

Mumbai: Anil Kumble’s resignation as chief coach may come up for discussion at the BCCI’s Special General Meeting tomorrow where the primary agenda will be ‘One State One Vote’ and the reinstatement of a five-member selection committee. The Kumble issue is not on the agenda for the SGM but it is likely to be raised by members. “The members may ask acting Secretary Amitabh Chaudhary and CEO Rahul Johri as to what was the situation that led to Anil Kumble stepping down from the chief coach’s post,” a state unit official told PTI today. “It’s not always required to be on the agenda. Some issues can be raised on floor with permission of the chair,” he said. BCCI extend application deadline for head coach role till July 9

The state units today met the COA in two batches. The issues pertaining to the Lodha Committee reforms was once again discussed. It is learnt that all state units are on the same page on the ‘One State One Vote’ issue. The body is likely to decide that while new members must be included, units like Mumbai, Vidarbha, Saurashtra, Baroda should not lose their voting rights. The other issues include reinstatement of a five-member selection committee as it will be impossible for three to track domestic matches.

Jatin Paranjpe and Gagan Khoda were removed from the panel for not having played Test Cricket. The ‘three-year cooling off period’ is another issue. Current Cricket Association of Bengal (CAB) President Sourav Ganguly may have to go in for a “cooling off” if it is implemented. For a few members like former BCCI President N Srinivasan and secretary Niranjan Shah, the age cap of 70 years is an issue.

In fact, Srinivasan was present during COA’s meeting with the first batch. “Vinod Rai told us that the General Body is the supreme body in the BCCI and he is hopeful that right steps will be taken at the SGM. Mr Srinivasan was also present but he only listened to the discussions,” the official said.

“Srinivasan said that if he has to put across his viewpoint, he will do so at an appropriate forum,” the official said. 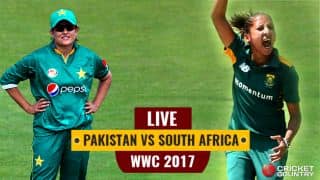