West Indies were subjected to the batting might of the Indian Board President XI, who on Day 1 of their practice match, piled up 360 for 6 decl

West Indies were subjected to the batting might of the Indian Board President’s XI, who on Day 1 of their practice match, piled up 360 for the loss of six wickets before declaring the innings. Ankit Bawne, coming off back to back to back centuries for Maharashtra in the Vijay Hazare Trophy, struck his 18th First-Class century to guide India BP XI to the score. Also chipping in with significant contributions were Shreyas Iyer and Mayank Agarwal, while Devendra Bishoo picked up 3 for 104.

Indian BP XI won the toss and chose to bat at Vadodara. Shannon Gabriel provided an early breakthrough removing the dangerous Prithvi Shaw for eight and Hanuma Vihari soon after. At 40 for 2, BP XI were recovered by Agarwal and Karun Nair, the two batsmen putting on 93 runs for the third wicket. Bishoo broke the stand sending Agarwal back 10 short of his ninth FC century, and Gabriel picked up his second to deal India a double strike with the wicket of Nair.

Then came the biggest stand of the match, as Iyer and Bawne got together to add 113 runs for the fifth wicket. The due batted with caution initially, and once they got their eye in, unleashed an array of strokes all around the ground. Bawne hit 15 boundaries during his 191-ball innings, whereas Iyer was the more aggressive of the two batsmen with three fours and five sixes. His 61 came off just 64 deliveries before Bishoo had him out caught for his second wicket.

Iyer s dismissal had no effect on Bawne as the Maharashtra batsmen continued to play his game without any fuss and brought up his third century in four innings. He tried to hang on with Smith Patel, who became Bishoo s third victim of the innings. With Jalaj Saxena, Bawne added a quick 54 runs towards the end before the declaration was announced and stumps were drawn. 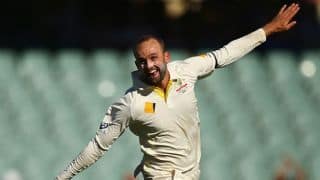