A lower order rescue, led by Ankit Bawne, was crucial in handing India A a slim lead against Australia A.

A lower order rescue, led by Ankit Bawne, was crucial in handing India A a slim lead against Australia A after they suffered a batting collapse on Day 2 of their 1st unofficial Test at the M Chinnaswamy Stadium in Bengaluru on Monday.

Continuing his good form, Bawne struck an unbeaten 91 his third straight fifty in as many innings and with some help from No. 7 Krishnappa Gowtham and No. 8 Kuldeep Yadav, got his team ahead by 31 runs.

India A resumed on their overnight total of 42/0 and the pair of Mayank Agarwal and Ravikumar Samarth extended the solid start to 62/0. However, neither could convert their individual start into something significant as first Agarwal fell on 47 and then Samarth was pinned in front for 25.

Soon 62/0 became 127/5 that saw a Abhimanyu Easwaran (36) throwing away after settling in to a big mixup with Bawne, was run out, thanks to a direct hit from Marnus Labuschagne.

Left-arm spinner Jon Holland, who removed opener Samarth, then cleaned up Srikar Bharat on 5 with India A still adrift of Australia A’s first innings total by 118 runs and with five wickets remaining.

Bawne then began the repair work, finding able partners in Gowtham and Kuldeep. With Gowtham (31), he added 51 runs for the sixth wicket and then took the total past the 200-run mark with Kuldeep (18).However, Brendan Doggett then wiped off the tail with the scalp of Mohammed Siraj and then effecting a run out of No. 11 Ankit Rajpoot to leave Bawne stranded nine short of a century. India A were allout for 274 with pacer Michael Nesser taking 4/61 and Holland 3/89.

Mohammed Siraj, who took eight wickets in the first innings, then gave his team an early success in Kurtis Patterson (13). However, first innings centurion Usman Khawaja (16*) in company of Travis Head (13*) ensured Australia A finished the day 11 runs ahead and without further damage. 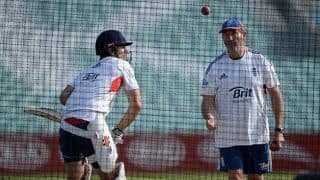