Former Mumbai captain Shishir Hattangadi is willing to testify in the case against Johri if asked by the BCCI.

Rahul Johri, the Board of Control for Cricket in India (BCCI) CEO, who was dragged into the #MeToo movement after being accused of sexual harassment at his previous organisation by an anonymous user on Twitter, is in for more trouble with another woman coming up with similar accusations against Johri.

According to a report in DNA on Saturday, the woman has written a complaint to the Supreme Court-appointed Committee of Administrators (CoA) member Diana Edulji on Friday. The woman, a senior media personality, has accused Johri of asking for sexual favours earlier this year.

Former Mumbai captain Shishir Hattangadi is willing to testify in the case against Johri if asked. “If the @BCCI want information about Rahul Johri on #metoo I am happy to assist them. I am putting my hand up as a former Captain,” Hattangdi tweeted on Friday.

If the @BCCI want information about @RJohri on #metoo I am happy to assist them. I am putting my hand up as a former Captain!

“I received a call from my friend this morning and advised her to write to the Committee of Administrators. I presume she has emailed the CoA, Hattangadi was quoted as saying in a report in MID-DAY on Saturday.

It’s not about @RJohri and their ilk,its about representing a country’s sport through the @BCCI on a world forum,that is revered. Individuals cannot be above the game. Caesar’s wife must be above suspicion,if at all,there is suspicion!

Look, she is a friend of mine and I must protect her. I reckon she must have mentioned details [in the letter to CoA], but I don’t have a copy of that letter. I was approached for help and I gave it. I advised her to write to the CoA which I believe has been done,” he said.

The news comes after the CoA formed a three-member committee on Friday to decide Johri s future. The committee has been given 15 days to submit a report during which examinations of all the allegations will be done.

Edulji had demanded Johri s immediate resignation. However, CoA chief Vinod Rai intervened and said that Johri should stand a fair trial as the accusation was made by an anonymous user on social media concerning Johri s previous workplace.

Meanwhile, the BCCI s chairperson the internal complaints committee, Karina Kriplani resigned late on Friday. Reasons for her sudden resignation are not known although it is believed that she was unhappy with how developments in the Board are shaping up. 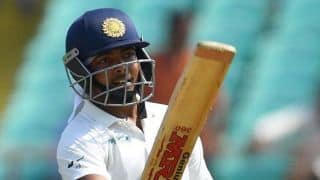