New Delhi: BJP leader and BCCI Secretary Anurag Thakur on Thursday slammed Chief Minister of north Indian state of Himachal Pradesh, Virbhadra Singh over shifting of Indo–Pak T-20 World Cup match from Dharamsala to Kolkata over the issue of security, saying it had caused a “big embarrassment” to the country. He questioned whether the Congress government of Himachal Pradesh had on its own taken the decision to deny “adequate security” to the match scheduled for March 19 or it was done at the behest of the party’s “high command”. FULL CRICKET SCORECARD: India vs Pakistan, T20 World Cup 2016, Match 19 at Eden Gardens, Kolkata

“The country has faced a big embarrassment because of Virbhadra Singh government’s denial of security to the match because of which it had to be shifted from Dharamsala to Kolkata,” Thakur said. The Bharatiya Janata Party (BJP) MP from Hamirpur in Himachal Pradesh, who was keen to have the crucial match in his home state, alleged that there was a “big conspiracy” to ensure that it did not happen.

Linking it to politics, he alleged that the state’s Congress government refused to provide security to the match after he raised in Parliament the issue of “fraud” done by the previous United Progressive Alliance (UPA) government in Ishrat Jahan case and questioned Congress over its role in Jawaharlal Nehru University (JNU) episode. “So I wonder whether the Chief Minister himself took the decision to deny security to this match or it was done at the behest of orders from the Congress high command,” Thakur said.

He alleged that the Chief Minister had shown his “double face” over the issue. While the Chief Minister publicly stated that he never refused security, a letter from his government to the Centre dated February 27 clearly says that “it will not be possible to deploy adequate security and provide protection to Pakistan Cricket Team and Pakistani citizens coming to witness the match,” said Thakur. He produced the letter written by the state’s Additional Chief Secretary (Home) Prem Chand Dhiman to the Union Home Secretary, which said that “the state government requests that the proposed Indo-Pak T-20 match may not be held at Dharamsala and shifted to some other venue”. 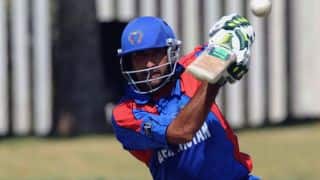