Virat Kohli's ladylove Anushka Sharma was quick to give her opinion if she wanted the former to shave or not.

Ajinkya Rahane is the latest entrant to the #BreakTheBeard challenge gang. Indian cricketers starting with Rohit Sharma, Hardik Pandya and Ravindra Jadeja have been fiddling with their beard. For long, these boys have been flaunting stubbles, some beard and now, with the summers arriving with scorching heat, they feel is the right time to experiment with the looks but guess what? Captain Virat Kohli is no mood to part with his beard. Rather let us say he is not permitted to do so. Yes, there are certain plights that men in relationship have to face. Not many have the option to complain. PHOTOS: Virat-Anushka are back together? Go for late night dinner

Kohli recently posted a picture in reply to Rohit, Pandya and Jadeja’s “makeovers”. Kohli wrote, “Sorry boys @hardikpandya_official @royalnavghan @rohitsharma45 but iam not ready to break the beard yet. Great job on the makeovers though. Kudos”

Sorry boys @hardikpandya_official @royalnavghan @rohitsharma45 but iam not ready to break the beard yet. Great job on the makeovers though. Kudos

Kohli’s ladylove Anushka Sharma was quick to comment that the cricketer “cannot” even dare to think of a shave. Kohli replied in agreement using romantic smileys.

Such public display of affection is rare in celebrities in today’s world. Kohli and Anushka have gone through a lot in the recent times. Last year, it was rumoured that the Indian captain and the Bollywood star had called in quits. Earlier, Anushka had been unfairly subject to social media pillorying for Kohli’s off-form.

It seems like the lovebirds have put all the negativity behind. In recent times, both have shown little hesitation in sharing pictures of each other or going to holidays together.

Last month, Kohli led India to a 2-1 victory over Australia. All is good with his love life as well but not the same can be said about his fortunes in the ongoing Indian Premier League (IPL). The Kohli-led Royal Challengers Bangalore (RCB) are languishing at the last position with two wins and five losses. They have a task to win six out of their remaining seven games to qualify beyond. 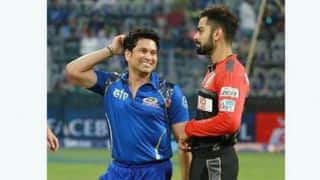 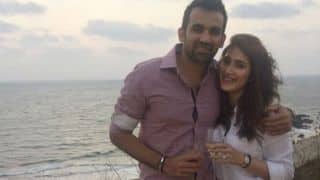