Karim Janat put up an all-round show to lead Kandahar Knights to their first victory of the inaugural Afghanistan Premier League 2018 on Saturday. After opting to bat at the Sharjah Cricket Association Stadium, Knights were tottering at 75/8 before a late assault from Janat pushed them to 137/8 against Nangarhar Leopards.

A combined bowling effort then saw Leopards being bowled out for 110 in 19.3 overs with Waqar Salamkheil leading the bowling charts with figures of 3/20 with Mohammad Naveed and Janat chipping in with two wickets each.

That Knights were able to post a decent total was all thanks to Janat’s late blitz as he smakced two fours and three sixes in an unbeaten 21-ball 40. Mujeeb Ur Rahman was excellent as he wiped off Knights’ top order with three wickets in his first two overs. By the eighth over, Knights were tottering at 27/5.

However, Najibullah Zadran (24) and Riki Wessels took them past the 50-run mark. However, they again slipped and at 75/8 were in real danger of being bowled out below 100 runs. It was then that Janat took control and together with Sayed Shirzad (19*) stitches an unbeaten 62-run stand for the ninth wicket.

Leopards found themselves in a similar spot in their chase. Opener Anton Devcich (0) and Johnson Charles (7) were sent packing inside five overs. Shafiqullah Shafiq and Hashmatullah Shahidi scored 23 runs each but failed to find little to no support from their teammates.

Unlike Knights, Leopards failed to reignite their innings and were eventually bowled out for 110. 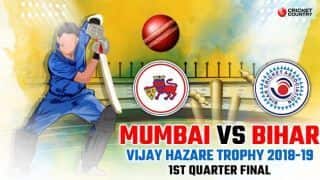