In a one-sided affair, Balkh Legends crushed Nangarhar Leopards by 171 runs in the first semi-final of the inaugural Afghanistan Premier League 2018.

In a one-sided affair, Balkh Legends crushed Nangarhar Leopards by 171 runs in the first semi-final of the inaugural Afghanistan Premier League 2018 to become the first team to qualify for the final.

After posting a mammoth 235/5 at the Sharjah Cricket Association Stadium on Friday, Legends skittled Leopards for a paltry 64 in 13.1 overs to record the biggest win of the tournament.

After opting to bat, Legends’ top-order fired in unison with opener Chris Gayle scoring a quickfire 54 off 30 in a 75-run opening stand with Darwish Rasool. The big-hitting Jamaican struck nine fours and two sixes in a bright start.

Rasool was equally lethal on Leopards bowlers, scoring 45-ball 78 with seven fours and four sixes. Later on, captain Mohammad Nabi stole the show as he chimed in with two fours and five sixes in a whirlwind 16-ball 47 that pushed the score well past the 200-run mark. Even Mujeeb-ur-Rahman was off colour as turned out to be the most expensive bowler of the night, leaking 51 runs in three wicketless overs.

In reply, Andre Fletcher began positively hitting three fours inside two overs but was cleaned up by Nabi for run-a-ball 13 in the third over. Johnson Charles hit the first ball he faced for a four but was out off the next delivery with Nabi picking up two wickets in an over. Their chase was well over after losing half of their batsmen inside the Powerplay.

Legends had reduced Leopards to 39/7 in 7.3 overs when a slight drizzle interrupted their march. Right after the resumption, Mirwais Ashraf removed Ben Cutting (11). Fittingly, the final wicket went to Nabi who capped off his memorable night with bowling figures of 4/12 from 3.1 overs. 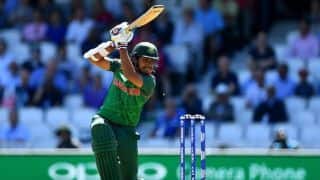