Cricketers tweeted about what they felt after the FIFA World Cup 2014 final.

The FIFA World Cup 2014 ended with Germany beating Argentina in the final at Rio de Janeiro. Germany overcame the Lionel Messi-led Argentina to pull off their first World Cup victory in over two decades. Their last victory was, by coincidence, against the same opposition, led by the similarly — if not more — iconic Diego Maradonna. The 1-0 scoreline was the same as well.

Football is a sport that is keenly followed even by a number of cricketers, and as the German juggernaut beat their Argentine opponents, Twitter was abuzz with reactions from cricketers.

Pakistan player Mohammad Hafeez mentioned that his son’s interest in the game was what prompted him to support the eventual runners-up.

Can we now have cricket fill the void for the 34 days until the Football season starts again, again?

Got to feel for Messi. #hero #legend

Dinesh Karthik seemed cordial in his appreciation of the Deutschland victory.

While Pat Symcox compared the German machine to other machines. 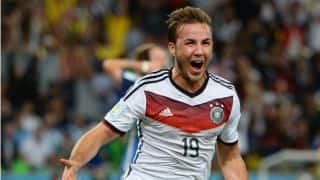