Arjun Tendulkar on Tuesday emulated father Sachin as he took eight wickets for just 22 runs for his school Dhirubhai Ambani School (BKC) in a Harris Shield match at Mumbai. 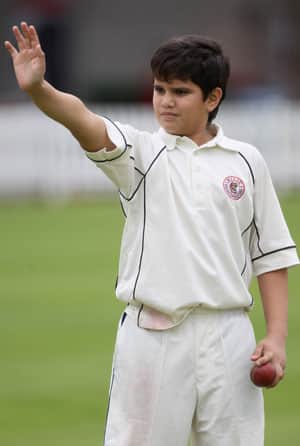 Arjun Tendulkar on Tuesday emulated father Sachin as he took eight wickets for just 22 runs for his school Dhirubhai Ambani School (BKC) in a Harris Shield match at Mumbai.

Senior Tendulkar had caught national attention with a splendid performance in the Harris Shield around 23 years ago.

Coincidentally, Arjun made his debut on the same day on which Sachin had debuted in international Test cricket 22 years ago.

The southpaw who opened the bowling for his team demolished the opponent, Jamnabai Narsee School who were bundled out for just 105 runs in 25 overs.

Junior Tendulkar bowled 12 overs straight as every batsman facing him felt uneasy against his bowling.

The team in-charge of Dhirubhai Ambani School, Hariom Phull was quoted in Mumbai Mirror as saying, “He was very accurate with the new ball and kept taking wickets at every interval. At one point, they were struggling 60 for 6. Tendulkar bowling 12 overs in this heat is a very encouraging sign for us.

“He has lot of control on his swing. Earlier in the DSO matches too he opened the bowling and was quite successful.”

However, Arjun could not repeat the feat with the bat as he was dismissed on the third ball during the run chase. But his team ultimately won the match by chasing the target with the loss of five wickets.

West Indies bundled out for 153 against India on third day