Arjun Tendulkar, son of batting legend Sachin, has been selected in the Mumbai’s Uner-14 team. 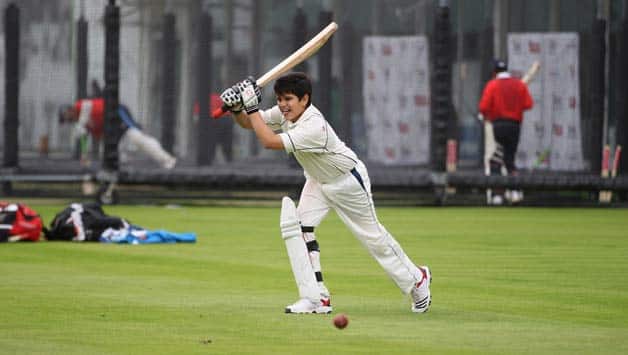 Arjun Tendulkar, son of batting legend Sachin, has been selected in the Mumbai’s Under-14 team. The 12-year old cricketer’s selection came after he slammed his first century in the MCA under-14 selection trials. The junior Tendulkar scored 124 runs as Khar Gymkhana beat Goregaon Centre. He will be representing Mumbai in the West Zone league matches.

In June last year, he was named in the Mumbai under-14 probables list for an off-season training camp. That selection had come at the back of good performances in school cricket and local age group cricket. The left-hander is also talented pacer. He finished with figures of eight for 22, helping Dhirubhai Ambani International School defeat Jamnabai Narsse School in November of last year. The 12-year old made his debut in January last year in the Cadence Trophy in Pune. He had scored 65 runs against PCMC Varroc Vengsarakar CA.

In an interview with Time magazine, Sachin Tendulkar had spoken about his son’s craze for cricket. He said, “As long as he is in love with cricket, it’s fine. Then you don’t look at your watch or count the number of hours you’ve practiced. It’s the sheer joy and satisfaction of being on the field. And that’s what I want [for him]. I believe cricket starts from your heart and then it travels up to your brain as you grow older. First you have to be in love with the game, and my son is in love with cricket,”

The selection will come as a big step in Arjun’s career. Regarded a bright talent, many had long ago predicted his rise as a cricketer. It would be interesting to see how the teenager would be able to cope with the pressure of being the son of a batting maestro.

The latest selection is certainly a step in the right direction for Arjun.