India opener Smriti Mandhana has her sights set on even greater heights after being conferred the Arjuna Award.

India opener Smriti Mandhana has her sights set on even greater heights after being conferred the Arjuna Award. Mandhana, 22, has been in stunning form for India women, and even ended the Kia Super League as the highest run getter with 421 runs from 10 matches. In the ODI series against Sri Lanka recently, Mandhana scored an unbeaten 72 and 51 helping India clinch the ODI series 2-1.

“It is good to get Arjuna Award. First, I did not know what Arjuna Award is, when I was 15-16 years old and other people used to get,” Mandhana told Women s CricZone in Colombo on Saturday. Amrita ma am (Amrita Shinde, the former India batter), my mentor, used to say that you will definitely get this when I am 21-22. I used to ask her, what s that award, I don t even know. When I became 17-18, I understood what it is. I was not expecting to get, I used to think she was just telling like that. It feels good to get the award and definitely motivates me to be a better player and perform well.”

Mandhana has been Indian women cricket’s biggest gain by a long shot. Six years after she made her debut for India, Mandhana is the second-highest run getter in ODIs this year tallying 669 runs in 12 matches and is behind only Sophie Devine of New Zealand by 31 runs. These include seven fifties and a century. In T20Is too, Mandhana has amassed 439 runs in 18 games at an average of 45.56.

“It s good. The more people listen about women cricketers the more the parents will send their girls to play cricket, Mandhana said. It is about reading in the newspaper or listening in the news about women cricketers. Awards or performances, it will all help a lot of parents to choose cricket for their girls as a career option. There will be a lot of girls playing cricket in the next two-three years and there will be healthy competition.”

Currently playing the T20Is against Sri Lanka, the left-handed opener has registered a duck and 6 in two games, but is expected to come good in the remaining two games. 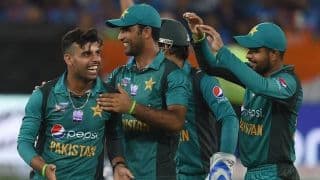