Ranatunga had promised to "kick out" players he accused of being corrupt and squabbling with teammates.

Ranatunga, 55, contested one of two vice-president posts but only came third in voting. His brother, Nishantha, who was nominated as secretary, was also defeated. (ALSO READ: Sri Lanka sports minister to present plan to change SLC constitution)

Ranatunga, who led Sri Lanka to victory at the 1996 World Cup, had vowed to clean up the board, which the International Cricket Council recently described as the sport’s most corrupt national body.

The former skipper, who is also a minister in the Sri Lankan government, had hoped to wrest control of the SLC ahead of the World Cup that begins in England on May 30. (ALSO READ: ICC urges Sri Lanka to come clean on corruption)

The national team has lost a host of recent series at home and abroad and has been beset by corruption allegations and in-fighting.

Former SLC chief Sumathipala was in power for more than two years until early 2018 and decided not to stand again. He backed Silva and other candidates opposed to Ranatunga. (ALSO READ: SLC rated most corrupt by ICC: Sri Lanka sports minister)

Ranatunga had promised to “kick out” players he accused of being corrupt and squabbling with teammates. 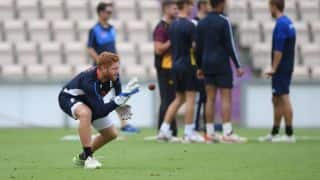