Nagwaswalla, is the first Parsi cricketer to play Ranji Trophy since Zubin Barucha represented Mumbai (then Bombay) between 1992 and 1995.

Gujarat s left-arm pacer Arzan Nagwaswalla ran through Mumbai s middle-order on day one of round four of the 2018-19 Ranji Trophy season, en route to his maiden five-wicket haul that saw Mumbai get bowled out for 297. That Mumbai managed that score was largely down to Shivam Dubey s counter-attacking 110.

But Nagwaswalla, playing only his third Ranji Trophy match, took the top honours. What is interesting about this 21-year-old pacer, who has a run up akin to Zaheer Khan, is the fact that he is the first Parsi cricketer to play Ranji Trophy since Zubin Barucha represented Mumbai (then Bombay) between 1992 and 1995.

Nagwaswalla comes from a village named Nargal from a well-populated Parsi community in the Maharashtra-Gujarat border town of Umbergaon. While most from his generation had moved out of Nargal looking for better opportunities to Maharashtra and Mumbai, Nagwaswalla stayed back because of cricket.

He rose through the ranks in junior cricket in Gujarat and playing his first match at the Wankhede stadium proved his worth against an experienced Mumbai middle-order. After fellow seamer Roosh Kalaria had sent back Mumbai openers Akhil Herwadkar and Jay Bista early, Siddesh Lad and Suryakumar Yadav revived Mumbai with a stand of 53 runs.

But Nagwaswalla brought Gujarat back in the contest claiming three wickets of zero run removing Yadav (40), Armaan Jaffer(0) and Aditya Tare (0). He then got rid of Lad for 62 after Lad and Dubey had put on 74 runs for the sixth wicket. He completed his five wicket-haul removing debutant Dhrumil Matkar (47) to finish with 5/78.

While the Parsi community have played an integral part during the early stages of cricket in India- even in the pre-independence era – the influential, or rather, the presence of Parsis in cricket has diminished in the last few decades. Only 12 players from the community have managed to represented India so far, with Farokh Engineer being the last male cricketer to have played the game at the highest level between 1961 and 1975.

Former Indian women’s captain and current CoA member Diana Edulji was the last player from the Parsi community to represent India at the highest level. She played 20 Tests, scoring 404 including an unbeaten 57, and took 63 wickets at 25.77. In 34 ODIs, she snared 46 wickets at 16.84. She made her Test debut in 1976 and played till 1991. 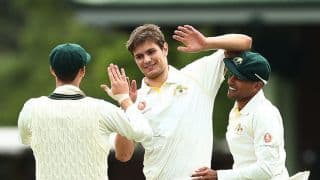