Following the Pakistan Test series, skipper Dinesh Chandimal had jokingly said that the witchcraft before the series helped them win it.

Sri Lanka came up with a dominating performance to tame Pakistan in the two-Test series at United Arab Emirates (UAE). Following the series, skipper Dinesh Chandimal had jokingly said that the witchcraft before the series helped them win it. He was asked more about it on Thursday during a press conference in Kolkata ahead of the Test series against India. However, he was soon defended by the team manager Asanka Gurusinha, who brushed the question aside and said that performing on the field was something he was looking ahead and not the witchcraft. FULL CRICKET SCORECARD: India vs Sri Lanka 2017-18, 1st Test at Eden Gardens

“He has answered some questions back there. In cricket, you got to get out there and perform on the field… Each player has to do that. That’s the way the Sri Lankan team believe. Yes, we have our own religious beliefs like all of your. But at the end of the day, you go there and just play,” said Gurusinha during a press conference in Kolkata ahead of opening Tests against India at the Eden Gardens Stadium from November 16, as reported by PTI. SL focusing on their strengths against IND, says Nic Pothas

“We know he’s one of our future players. It’s up to us to protect and guide him through. If we brought him here and he failed, he would have been out of the team for nearly one and half years. We didn’t want to do that. We have some plans for him. We want him to play domestic cricket. I believe he will come strong.”

“We can’t take on the no 1 side with injured players. We want to give him time to build his fitness level. He will be definitely there for the ODI series and we will start from there. He’s not out of Test cricket for us. Hopefully, he will be back by Bangladesh early next year.” 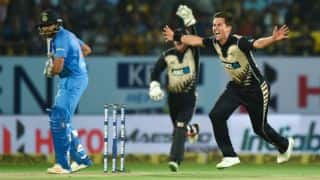