Afghanistan registered a comprehensive 45-run victory over Zimbabwe to take an unassailable lead 2-0 lead in the three-match series. Afghanistan captain Asghar Afghan achieved a massive feat during the 2nd T20I match against Zimbabwe on Friday in Abu Dhabi. Afghanistan registered a comprehensive 45-run victory to take an unassailable lead 2-0 lead in the three-match series.

With the victory, Asghar equaled the tally of most wins as captain in T20I cricket with former India skipper MS Dhoni. Both Asghar and Dhoni have led their teams to 41 victories in the shortest format of the game.

Dhoni, who announced his retirement from international cricket last year, captained the Indian team in 72 matches including the historic 2007 T20 World Cup triumph. While Asghar has led the Afghanistan team in 51 T20Is.

England’s Eoin Morgan is third on the list with 33 wins in 58 matches.

Meanwhile, in the clash, Afghanistan won the toss and elected to bat first against Zimbabwe. They posted a mammoth total of 193/5 in the 20 overs as Usman Ghani scored 49 runs, while Karim Janat slammed 53 runs. Veteran Mohammad Nabi also made a valuable contribution of 40 runs in just 15 balls.

Leg-spinner Rashid Khan was the pick of the bowlers from the Afghanistan team as Zimbabwe were restricted for just 148 runs in 17.1 overs. Naveen-ul-Haq and Mohammad Nabi also scalped two wickets each in the match.

They secure a 45-run victory after bowling out Zimbabwe for 148, with Rashid Khan taking three wickets in an over!#AFGvZIM ➡️ https://t.co/F6MUjfiFYM pic.twitter.com/i6TX1gV95Y

Afghan was impressed with his team performance and said that the team’s morale his high after the back-to-back victories.

“T20s are very important for us with the World Cup coming. It’s good to win both games so our morale is high. We have different plans depending on the wickets we lose, so today Karim and Ghani played really good,” Afghan said in the post-match presentation.

The third match of the series will be played on March 20 Saturday at Sheikh Zayed Stadium, Abu Dhabi. 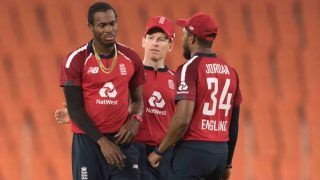 IND vs ENG: Eoin Morgan And Co. Fined 20 Per Cent of Match fees For Slow Over-Rate in 4th T20I