Asghar Stanikzai played a crucial innings of 62, as Afghanistan registered 153 for the loss of seven wickets, against Sri Lanka in WT20 2016.

Afghanistan batsman Asghar Stanikzai played a crucial innings of 62, as Afghanistan registered an average total of 153 for the loss of seven wickets, against defending champions Sri Lanka, in the Super 10 Group 1, Match 16 of the ongoing ICC World T20 2016, at the historic Eden Gardens Stadium in Kolkata on Thursday. Thisara Perea claimed three wickets for 33. Earlier, Afghanistan skipper Asghar Stanikzai won the toss and elected to bat first on a a typical slow track, that is most likely to assist spinner, as Sri Lanka packed their side with spinnning all-rounders, while Mohammad Nabi was cleared to play in the game following an injury scare. FULL CRICKET SCORECARD: Sri Lanka vs Afghanistan, T20 World Cup 2016, Super 10 Group 1, Match 16 at Kolkata

Afghanistan began the innings on a shaky note, as openers Mohammad Shahzad and Noor Ali Zadran were aboe to contribute just 12 runs, before Shahzad fell for mere eight in the third over, to Angelo Mathews, after being caught by Dushmantha Chameera. However, it was followed by a healthy 32-run stand between Noor Ali and Stanikzai, before Noor Ali fell for 20 to spinner Rangana Herath, in the ninth over. FULL CRICKET UPDATES: Sri Lanka vs Afghanistan, T20 World Cup 2016, Super 10 Group 1, Match 16 at Kolkata

Following his dismissal, it was a couple of more batsmen, who fell for cheap, without hardly putting up a stand as Karim Sadiq was dismissed for an unfortuante duck by Thisara Perera, after being caught by skipper Dinesh Chandimal, in the 10th over, followed by Mohammad Nabi, who fell trapped leg-before to Herath for mere three in the very next over, as the score read 51 for the loss of four wickets.

However, it was followed by a crucial 61-run stand between Stanikzai and Samiullah Shenwari, as Shenwari fell in the 17th over to Nuwan Kulasekara, after being caught by Perera for 31. Meanwhile, Stanikzai brought up his half-century in 42 deliveries, including a couple of boundarties and three sixes. In the 19th over, it was Shafiqullah, who was dismissed for mere five by Perera, following a brief 20-run stand. The end of 19th over saw Stanikzai getting dismissed for 62 to Perera again, after being caught behind by Chandimal, as Najibullah Zadran along with Dawlat Zadran batted it out to steer Afghanistan to an average total of 153 for the loss of seven wickets. 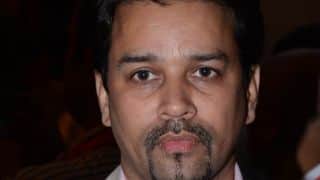