With the series and the urn already in the bag, Australia will look for a clean sweep.

Australia have surprised one and all with their aggressive brand of cricket over the past four Ashes 2013-14 Tests. They have got back the old swagger and proved themselves with some high-class performances. It is no wonder they have already won the urn and lead the series 4-0 with the fifth and final Test at the famous Sydney Cricket Ground (SCG) starting on January 3, 2014. The New Year’s Test has seen some fantastic matches in recent memory and this one against England could prove to be another thrilling clash.

England have not done themselves any favours by underperforming to a whole new level. When they lost 5-0 in the 2006-07 Ashes series, they faced a legendary team and were themselves a few good players short. But losing to that team was not a negative thing. England entered this Ashes series as the favourites and have not done anything to justify that claim. Australia probably did not have anything to lose and that has helped them to play freely.

Such has been England’s plight that they have truly won only one single day from all of the four Ashes Tests so far. That was Day Two of the fourth Test at the Melbourne Cricket Ground (MCG). But Australia soon dispelled any England hopes on Day Three. England had the worst of their batting collapses in the second innings at the MCG and lost by eight wickets. England have also lost four tosses in-a-row, but one cannot blame the toss when they have been completely outplayed in all those matches.

After the four Tests, one cannot really blame the conditions as well. The pitches have been highly conducive for extra bounce and pace and England have been found out. Australia have hit England with speed, especially with Mitchell Johnson. England have had three chances after the first Test in Brisbane at The Gabba, but have not used the two of their fastest bowlers in Steven Finn and Boyd Rankin. They have only warmed the bench. Australia have not needed any changes as why fix what isn’t broken.

Australia have had six of their top seven batsmen scoring at least one century in the series. The one who has not scored — George Bailey has scored one half-century and also smashed a world record 28 runs off one over from James Anderson. Clearly their batting is in order. Johnson alone has taken more wickets than England’s top two wicket-takers. The others have also chipped in with their fair share of wickets. So, it will be no surprise if Australia go into the fifth and final Ashes 2013-14 Test with an unchanged side. There are some fitness concerns though that can force a few changes.

Chris Rogers and David Warner have proved to be a good opening partnership for Australia. While Warner is the hothead, Rogers is the calm mind. Although, Rogers has shown that he can score at a much faster strike-rate. Shane Watson is now an automatic No 3 and captain Michael Clarke will be at No 4. Clarke is by far the best batsman in world cricket at the moment. Steven Smith has settled himself in at No 5 and is likely to be followed by Bailey at No 6.

Brad Haddin just keeps getting better and better with the bat and the gloves and there is no one better to come in at No 7. Then come the bowlers who help out with the bat as well. Johnson has been the standout player of the series and there is absolutely nothing that can stop him from getting the Man of the Series award. But he will be itching to get onto the Sydney turf and create more havoc for the England batsmen. He is ably supported by fellow pacers Ryan Harris and Peter Siddle and also off-spinner Nathan Lyon. All four are in the top five wicket takers in the series.

Only if there are injury concerns for Harris, will bowling all-rounder James Faulkner come into the side. Apart from that, there should not be any changes.

England were chasing a record fourth consecutive Ashes at the beginning of the series. Obviously that will not happen. England may look to make a few changes to mainly make sure the players coming in are not scarred by the four massive losses that others have directly been part of. Alastair Cook has come under heavy criticism for the manner in which his team has surrendered to Australia. His tactics have not only been questioned by Shane Warne, but former England players like Geoffrey Boycott, Michael Vaughan and Nasser Hussain. His use or rather lack of use of Monty Panesar in the fourth Test garnered a lot of scrutiny.

So, who will make the final XI? There seems to be absolutely no definitive answer to that question. But a team has to be picked and in the end they have to perform. Cook looked like a whole new batsman, not captain, in the fourth Test. He played as good a knock in the second innings as seen for the last few months. But the problem was that he got out at the wrong time for England. There should be no problem with his selection for the Sydney Test, although, there might be some serious discussions and his captaincy might be under threat from the next series onwards.

Opening partner Michael Carberry is England’s second highest run-scorer in the series, but in County cricket he is an absolute hitter and can bludgeon the ball very hard and very long. No one has seen anything of that sort from him so far. He looks to be batting with only one thing in mind — to stay at the crease for a really long time. But if England really look to the future, they might bring in middle-order batsman Gary Ballance to replace Carberry.

That would push Joe Root to open along with Cook. While this pair was not successful in the 2013 Ashes, England did win the series 3-0. This would also mean that Ian Bell would bat at No 3 as every single commentator in the series wants him to be promoted. Kevin Pietersen is England’s leading run-scorer so far and he scored 71 and 49 in both innings of the fourth Test at the MCG. Ballance would then come in at No 5. All-rounder Ben Stokes will be at No 6 and wicketkeeper Jonny Bairstow will come in at No 7.

England’s bowling has been a major let down and some tough calls might be taken, but that may not happen for the fifth Test. Stuart Broad is a sure shot as he is the second highest wicket-taker in the series with 17. He is behind only Australia’s Johnson, who has 31 wickets. Tim Bresnan is not a genuine wicket-taker, but his batting abilities could get him selected again. Cook’s high lack of confidence in left-arm spinner Panesar could pave the way for right-arm leg-spinner Scott Borthwick. He is also a fine batsman, so, he might just get his England debut on January 3 at the SCG.

For all his experience and ability, Anderson will be selected in the starting XI. So, that would again leave out Finn, Rankin and Chris Tremlett. It does not matter which team England go with, what matters is whether they perform. Their morale is probably at an all-time low and the Australians will be relishing this. They lost three Ashes series in-a-row before this. Their comeback has been impressive as they lead by a 4-0 margin. Australia will go all out for a 5-0 whitewash and there seems little that England can do to stop them from achieving their dream. 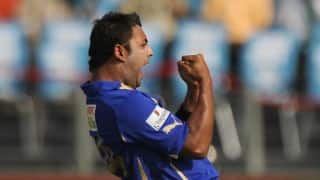