Australia's emphatic humbling of England in the first Ashes Test was met with glee by the nation's media on Monday which said "the spell is broken, the curse is lifted". 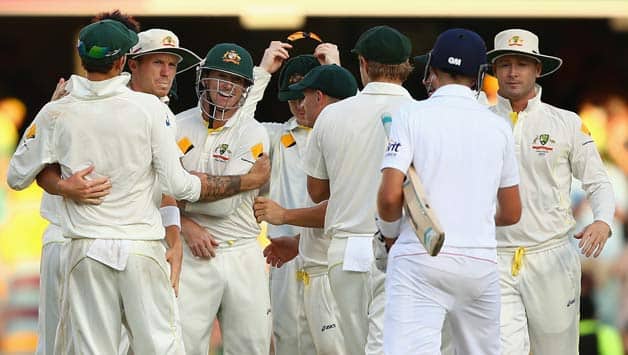 Australia‘s emphatic humbling of England in the first Ashes Test was met with glee by the nation’s media on Monday which said “the spell is broken, the curse is lifted”.

After a 3-0 hammering by England in the Ashes that ended in August, the relief that Australia had finally got one over the old enemy was evident.

Their cricket writer Wayne Smith added: “The spell is broken, the curse lifted. Australia’s long wait for Ashes respectability is over.”

“Ever since the 2009 campaign in England, 16 Ashes Tests ago, Australia humiliatingly has been under the cosh from its oldest enemy, having lost three series in succession. And the fear was that there was more to come this summer.”

Instead, England suffered one of their heaviest-ever Ashes Test defeats, losing by 381 runs at the Gabba in Brisbane to go one-down in the five-Test series. In doing so, Australia ended a nine-Test stretch without a victory.

It was the commanding way in which they trounced England that excited the press with the Sydney’s Daily Telegraph suggesting the Ashes was all but won.

“Gift wrap the Ashes and put them in the out tray,” said the tabloid’s cricket writer Malcolm Conn.

“History tells us that England’s stranglehold on the little urn will soon be broken.”

“In more than 80 years of Test cricket at the Gabba only twice has a team won an Ashes Test there and failed to press home the advantage.”

The tourists collapsed under the searing pace of Mitchell Johnson and were all out for 179 late on the fourth day after they were skittled out for 136 off 52.4 overs in the first innings.

Under a front page headline “High and mighty” accompanied by a picture of Johnson, the Sydney Morning Herald said Australia had “crossed their psychological Rubicon”.

“No matter what they said, they didn’t know they could beat this England team until now,” it said.

“Conversely, England didn’t know they could be beaten. In four days of cricket, everything has changed.”

“Having seen Clarke’s team sacrifice winning positions many times before, England were sure they could be relied upon to do the same again,” he said.

“But having got used to waiting, England found it hard to switch gears when necessary.”

Even the staid Australian Financial Review put a picture of Johnson on its front page, trumpeting that “Clarke’s men trounce the Poms,” such is the popularity of cricket Down Under, with victory over former colonial power England the ultimate in sporting achievements.

The second Test is in Adelaide starting on December 5.