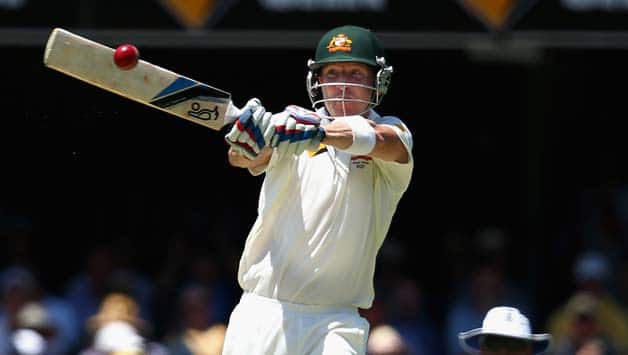 Haddin said with England on 55 for two at lunch on day two, bowling coach Craig McDermott had stern words for what was shaping up as an unthreatening Australian attack.

And the team talk had the desired effect as the fired-up Johnson, finishing with four wickets, led a rout of the England batsmen who slumped to be all out for just 136.

Australia returned to the crease to be 65 without loss at stumps, a lead of 224 with 10 wickets in hand and a high chance of extending their 25-year unbeaten run at the Gabba.

“We stayed with the plans that worked. But we probably didn’t start with the ball the way we would have liked,” Haddin said.

Haddin said Johnson, back in the Test team for the first time since March, was back to his best after his raw pace and accuracy unnerved the England batsmen. The left-arm paceman regularly clocked speeds in the upper 140 kilometres (90 miles) per hour and finished with four for 61 off 17 overs to restrict the tourists.

He played down the much-discussed problems of confidence said to affect the mercurial quick, who has been taunted mercilessly by English fans in the past.

Asked whether Johnson’s spirited innings of 64 had helped him bowl with renewed confidence, Haddin said: “I don’t think he’s had too many problems, he’s a 200 Test wicket-taker. I’m comfortable with where Mitch is at, it’s you guys (media) who talk about it. Mitch has been bowling with some very good pace over the last few months,” added Haddin, who top-scored with 94 in Australia’s first innings of 295.

“He was outstanding in India (ODIs) with his pace. Today was just reward for the work he’s put in. It’s good to have him back in the team and any guy who can push the radar up near 150 ks, no matter how well you’re playing can make it uncomfortable for the opposition with Mitch letting some go,” Haddin said.

England opener Michael Carberry, top-scorer in the visitors’ innings with 40 in his first Ashes Test, admitted that Johnson was simply “world-class”.

“Like any good spell, it’s always hard starting your innings against a bowling unit that have got their tails up,” Carberry said.

“That was pretty much the case with the guys who came in during that little stint just before tea.

“Mitchell is a world-class performer. He’s definitely, in terms of pace, up there with some of the quickies I’ve faced in my time. More importantly, he put the ball in the right area, which is also going to be tough for anyone. In our preparations for the game we knew what he was going to bring, we weren’t quite up to it today. But tomorrow is a new day and we have another innings to prove ourselves and I’m pretty confident we will do that,” Carberry concluded.