England suffered a collapse and are at 94 for eight at tea on Day of the second Ashes 2013-14 Test in Brisbane at The Gabba. They trail Australia’s 295 by 201 runs. Mitchell Johnson has taken four wickets. Nathan Lyon got two wickets and was on a hat-trick. Michael Carberry top-scored with 40, but none of the England batsmen contributed much. England suffered a collapse and are at 94 for eight at tea on Day of the second Ashes 2013-14 Test in Brisbane at The Gabba. They trail Australia’s 295 by 201 runs. Mitchell Johnson has taken four wickets. Nathan Lyon got two wickets and was on a hat-trick. Michael Carberry top-scored with 40, but none of the England batsmen contributed much.

The session started with England at 55 for two. Michael Carberry and Kevin Pietersen scored at a slow run-rate, but looked assured. Pietersen is playing his 100th Test for England. Johnson tested Pietersen with some quick short deliveries. Johnson then bowled one short of a length and straight at Pietersen, who pulled behind square on the leg side. There were two fielders in the deep, but Pietersen found the gap and got his first four of the innings.

Carberry then opened the face of the bat slightly to a full delivery from Johnson and got a four in-between second slip and gully. Peter Siddle then bowled a fuller delivery to Pietersen and the batsman hit it straight back to the bowler. The ball came at an awkward height near the chest region and Siddle dropped a tough chance.

Pietersen (18) then flicked a straight delivery from Ryan Harris to George Bailey, who took a sharp catch at mid-wicket. Then came the collapse.

After a few wayward overs, Johnson was back. The left-arm fast bowler was bowling from round the wicket to the left-hand batsman. Carberry looked uncomfortable with this ploy. Johnson then dug one in and Carberry tried to take the bat away, but the ball was too quick and found the outside edge of the bat. Shane Watson took the catch at first slip.

Off-spinner Nathan Lyon then got two in two. He first dismissed Ian Bell for five. The ball pitched on middle-stump from round the wicket and got a bit of extra bounce. Bell got an inside edge onto his thigh pad and the ball lobbed up in the air and Steven Smith took the catch at forward short-leg.

The next ball was similar and Matt Prior also edged it onto his thigh pad and Smith took the catch. The umpire said not out, but upon replay the decision was reversed. Stuart Broad faced the hat-trick ball, but left it alone as it is wide of off-stump.

Johnson then got rid of Joe Root for two. He bowled one wide of off-stump and Root went for the drive, but was slightly late to it and edged it to Smith at third slip. Graeme Swann was the next to fall for a duck as Johnson picked up his fourth wicket. Swann inside edged one onto his pad and Bailey took the catch at forward short-leg.

Tea was taken and England were at 94 for eight. They trailed Australia by 201 runs. They only managed 39 runs in the second session and lost six wickets. 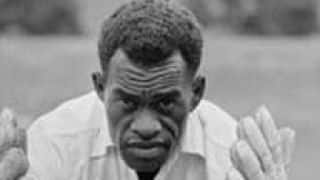 Petero Kubunavanua: The Fijian who fielded in a skirt and featured on a stamp before Don Bradman and Viv Richards