Lehmann also said Australian players would not sledge England about batsman Jonathan Trott, who has returned home with a stress-related illness.

“He (Warner) understands where the line is. I think he said himself he crossed the line so that is a better understanding of the game,” Lehmann told reporters.

“Obviously we didn’t know what was going on with Jonathan Trott and that certainly won’t be talked about in this Test match at all. We wish him all the best in his recovery.”

Lehmann scotched speculation that Harris would be rested from the Adelaide Test starting on Thursday, with only a three-day turnaround before the third Test in Perth.

“I have said that all along — we’re not changing our stance on that. If he is fit to play, he will play.

“We don’t rotate (bowlers), mate. If you’re fit, you play. The best 11 will play for Australia each and every game.”

Prominent ex-players and the media have regularly criticised Australia’s contentious use of the player rotation policy, particularly for fast bowlers, designed to guard against them breaking down from too much cricket.

Test leg-spin great Shane Warne once said: “When we were number one there weren’t mission statements flying around, but we got the selection process right and the best 11 were selected for every game.”

Lehmann said after trouncing the tourists in the series opener by 381 runs, Australia’s challenge was to prove their consistency.

“It’s just one Test match,” he said. “We have got to play well, back that up, and show we’re the side we want to become — not just one-hit wonders, if you like.

“And if we do that, we know we will get the results. But we can’t just rest on our laurels after one Test.”

The drop-in Adelaide pitch is expected to be a batsman-friendly strip, in contrast to the bouncy Brisbane wicket in the first Test, and Lehmann said Australia would adjust their plans accordingly.

“We might have to come up with a few different plans,” he said.

But he forecasts Australia’s bowlers would again use short-pitched deliveries to unsettle England’s batsmen.

“We will use our quota (of short balls) where possible,” Lehmann said.

“In Brisbane obviously, it had some pace and bounce in it. Adelaide might be a bit different, but it might reverse a bit more and spin a bit more.

“So we just have to sum that up as we go. The key is first innings of both sides, making sure you make some big runs or limit the opposition.” 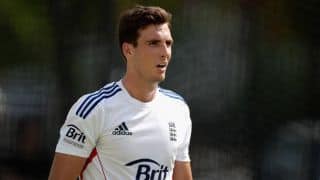