Australia are pondering whether to recall controversial batsman David Warner for their must-win third Ashes Test against England at Old Trafford starting on Thursday. 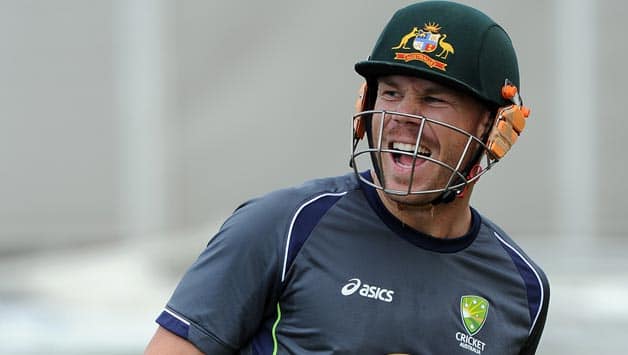 David Warner is back into the Australian squad for the third Test after being suspended and sent to South Africa to play for Australia A, where he hit a century © Getty Images

Australia are pondering whether to recall controversial batsman David Warner for their must-win third Ashes Test against England at Old Trafford starting on Thursday.

Top-order batting has long been Australia’s Achilles heel and so it proved in a crushing 347-run second Test defeat at Lord’s, where the tourists were skittled out for just 128 in their first innings.

England lead the five-match series 2-0 and Australia need to win in Manchester if their hopes of regaining the Ashes are not to be extinguished — a drawn series would see holders England retain the urn.

Australia, following a 4-0 series reverse in India earlier this year, have suffered six successive Tests defeats for the first time since 1984 — they last lost seven in a row in the 19th Century.

Warner missed the first two Tests of the current series having been suspended in the run-up to the Ashes for punching England’s Joe Root in a Birmingham bar after Australia lost a Champions Trophy match to their arch-rivals last month.

Instead the 26-year-old opener joined up with Australia A for whom he made 193 against South Africa A in Pretoria last week before becoming embroiled in a sledging row with the home side’s wicketkeeper.

Former Australia captain Ian Chappell is adamant that, if selected, Warner must open as that would give him the best chance of imposing his game on England’s bowlers.

But that would mean Australia coach Darren Lehmann having to give up on at least half of his chosen first-wicket duo of Shane Watson and Chris Rogers.

A middle order berth could be found for Warner if Australia drop Phil Hughes or Steven Smith fails to recover in time from a back injury that saw him miss training Tuesday.

Australia’s batsmen, none of whom including world class strokeplayer and captain Michael Clarke, have yet made a hundred this Ashes, are assailed by conflicting advice, be it “play your natural game” or “bat time”.

For Rogers, who has scored just 89 runs in four innings this series, the example of former Australia opener Justin Langer, a teammate at Western Australia, is one he hopes to follow in Manchester.

“It’s just to fight,” Rogers said Tuesday. “There were times playing at WA, and we weren’t doing so well, and that was Justin Langer’s motto.”

Rogers added: “You’ve got to fight as hard as you can, try to stay out there and not surrender your wicket — which we’ve probably been doing a little bit too easily.”

It always seemed unlikely an Australia pace attack with a history of injury problems would last the whole of the Ashes.

So it was no great surprise when James Pattinson, who played at Lord’s, was ruled out of the rest of the tour with a stress fracture of the back.

Jackson Bird and left-armer Mitchell Starc are vying to replace Pattinson while, given Old Trafford’s reputation for ‘turning’ pitches, Australia also have some tricky decisions regarding spin bowling.

Do they field two spinners, and if they stick with only one, do they replace teenager Ashton Agar, wicketless at Lord’s on a spin-friendly surface, with unlucky off-spinner Nathan Lyon, left out of the first two Tests?

England have called up left-armer Monty Panesar into their squad to supplement the off-breaks of Graeme Swann, joint leading bowler in the series alongside England spearhead James Anderson with 13 wickets.

Dealing with the complacency point, Anderson, on his Lancashire home ground this week, said: “We have to concentrate on winning this game and not looking too far ahead in the series.”

The fact England won by such a huge margin at Lord’s without a major contribution from Pietersen, hundreds from Ian Bell and Root (180) steadying the ship after top-order collapses in both innings, indicated they can cope without the South Africa-born shotmaker.

Meanwhile Leicestershire’s James Taylor, called up as cover for Pietersen, made a hundred against Australia while guesting for Sussex last weekend.

England have also added towering Surrey fast bowler Chris Tremlett — who starred on the 2010-11 Ashes tour of Australia — to their squad and he will be looking to put pressure on the likes of Stuart Broad.