Australia captain Michael Clarke said on Tuesday that his side is ready to take on England in the highly-anticipated Ashes series starting on July 10 at Trent Bridge. 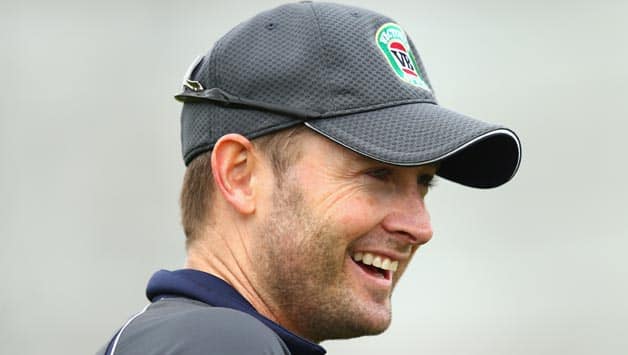 Australia captain Michael Clarke said on Tuesday that his side is ready to take on England in the highly-anticipated Ashes series starting on July 10 at Trent Bridge.

Clarke wrote in his column for the Herald Sun: “We know we’re underdogs but we’re up for the challenge. In my mind our preparation is done. There’s only a little fine-tuning heading into Wednesday’s match.”

“I couldn’t be happier with the way we played during our four-day matches against Somerset and  Worcestershire. It has been an ideal preparation. There was a lot of good batting and some good bowling in unhelpful conditions,” he wrote.

“Everyone on tour has played in English conditions during this trip, whether it be one-day cricket or the four-day format. We have 18 in our touring squad and just about everyone made runs or took wickets in at least one game. But more than that we took the game on, we played with real intent. That is how I want us to play our cricket, to really take it up to England,” Clarke expressed.

Clarke said he seeks intent within his players and there is lot more to it.

“Intent does not mean trying to score at a run a ball. It’s about assessing conditions and playing accordingly in a positive manner. There are going to be times when we have to grind and times when we have to put our foot to the floor. We’re going in with our eyes wide open about how difficult this contest will be and we’re excited by that,” the Australian skipper wrote.

Clarke admitted that some of the Australian cricketers have been ‘scared’ in some of the previous series they have played, but assured that his feeling is not there anymore amongst anyone.

“We are all champing at the bit to rip into old enemy. On other tours some players have been scared, fearing what lies ahead, but the feeling around this group is a great sense of anticipation. Everyone is looking forward to the atmosphere and the energy it will generate, which is very pleasing,” he said.

The Australian captain revealed that some of the players who have been a part of the Ashes series have shared their valuable experiences.

“The players who have been involved in Ashes series here before have spoken openly to the rest of the squad about what it’s like. We’ve embraced the whole sense of occasion on and off the field and we’re soaking it up. We’re enjoying every single part of it. An Ashes series in England is one of the best tours an Australian cricketer will experience. It is to be savoured,” he wrote.

Clarke admitted that the Barmy Army will be against his men but he also looks forward to have packs of Australian supporters across various grounds in England.

“During our practice games the crowds were giving us a bit of stick and the boys were all having a laugh. We know the Barmy Army is going to be into us but all that sort of stuff doesn’t faze us. We’re here to enjoy it. The boys can’t wait to be part of it. Friendly banter is a central part of cricket’s most traditional rivalry, as it should be. I think it’s great for the game when the crowd gets involved,” he wrote.

“We also know there will be strong pockets of Australian support and we always appreciate that on overseas tours. It shows how much fans love the game if they’re prepared to travel halfway around the world to cheer on Australia,” Clarke added.

Clarke expressed that even though the Australian side has faced tumultuous time in the past weeks, they will be up for the challenge.

“We’re going to enjoy every minute of it. We’ll enjoy the tough times, and there will be plenty of those, and we’ll enjoy bowling to a strong batting line-up and facing a good attack. There have been some major upheavals in recent weeks but to suggest we’re a team in disarray could not be further from the truth,” he wrote.

Clarke concluded: “Anyone who has seen us playing so positively and with such purpose in our lead-up games would see we’re fully focused on this campaign. Inside the camp we’re in a good place. We can’t wait for the first Test to begin.”