Australia's press on Friday acclaimed Michael Clarke's captain's knock in the third Ashes Test but raged at a controversial umpiring decision that even Prime Minister Kevin Rudd called "one of the worst" he had seen. 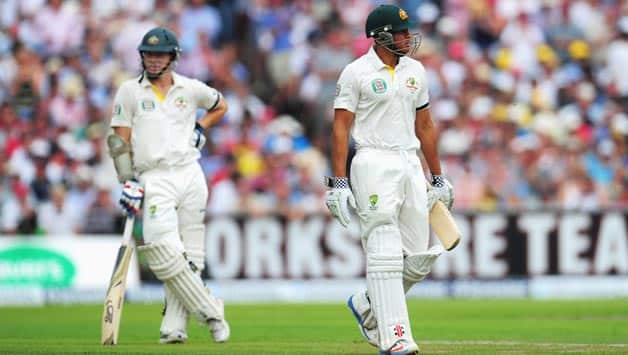 A dejected Usman Khawaja (right) walks back towards the dressing room after being given out by the third umpire. Khawaja was given out caught behind despite video evidence showing no clear edge © Getty Images

Australia’s press on Friday acclaimed Michael Clarke‘s captain’s knock in the third Ashes Test but raged at a controversial umpiring decision that even Prime Minister Kevin Rudd called “one of the worst” he had seen.

Captain Clarke led from the front with an unbeaten century on the opening day of the Test where yet more Decision Review System (DRS) controversy dogged the series with England.

Clarke’s 125 not out, the first hundred by an Australian this series, helped the tourists to 303 for three at stumps on Thursday in a match his side, 2-0 down with three to play, must win to have any hope of regaining the Ashes.

Australia’s newspapers praised Clarke’s much-awaited ton as his team enjoyed their best day of the Ashes after a humiliating 347-run defeat in the second Test at Lord’s.

“Somewhere if any Australian batsman was going to score a century in this Ashes series it was always going to be the captain, Michael Clarke,” The Australian‘s Wayne Smith wrote.

The Daily Telegraph‘s Malcolm Conn said Clarke was now in the same position as Allan Border almost 30 years ago when he was forced to single-handedly carry a struggling Australian side until the next generation came through.

“Such a challenge highlights the substance of the individual,” Conn said. “Border was always a fighter. Those who mistook Clarke as more style than substance are now aware that he is one too.”

But the media came down hard on yet another DRS controversy, which some said may have “compromised” batsman Usman Khawaja’s struggling Test career.

Khawaja was given out by on-field umpire Tony Hill for just one having been adjudged to have edged off-spinner Graeme Swann to wicketkeeper Matt Prior.

Hill’s decision was endorsed by third video official Kumar Dharmasena despite evidence which appeared to suggest it should have instead been reversed.

Rudd said he was outraged and on social media fans vented their anger with an early count that Khawaja was mentioned 4,955 times on Twitter, a huge jump from 126 an hour earlier.

“I’ve just sat down to watch the Test,” tweeted Rudd. “That was one of the worst cricket umpiring decisions I have ever seen.”

The Australian‘s cricket columnist Gideon Haigh said the DRS “had another of those days when it looks like your grandma trying to make a call on a smartphone and accidentally downloading a snuff movie.”

Haigh went on: “Khawaja, a young man fighting for his career, was a victim; Steven Smith, ditto, was a beneficiary. Australia came out ahead, but the game overall was the loser, for cricket’s continuing officiation [sic] crisis overshadowed a stoic, battling hundred from Michael Clarke.”

Conn fumed in the Daily Telegraph: “The umpire decision review system is a joke. Bad umpiring on the field has been compounded by bad umpiring off it.

“No matter how good the technology is, if those using it cannot see what millions are watching on television then it is of no use.”

Fairfax Media‘s Chris Barrett said the series had been marred by umpiring and the DRS.

“The manner of Usman Khawaja’s exit for one was farcical, evidence that incompetency cannot be easily overcome by innovation,” he said.

“The Khawaja dismissal was brought about by shocking decisions from both an on-field umpire and the official in the video review box.”