Stewards in white coats, gentlemen wearing Panama hats and an expectant crowd milling their way towards Trent Bridge - there were some familiar scenes on Wednesday in the build-up to the first Ashes Test in Nottingham. 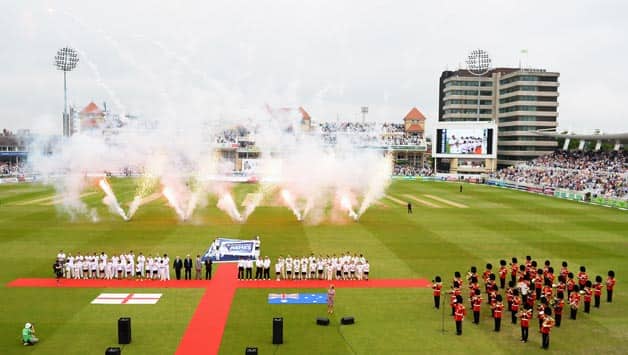 Stewards in white coats, gentlemen wearing Panama hats and an expectant crowd milling their way towards Trent Bridge – there were some familiar scenes on Wednesday in the build-up to the first Ashes Test in Nottingham.

Ashes-holders England were facing arch-rivals Australia in the latest edition of a Test rivalry dating back to 1877 that makes it the cornerstone of international cricket.

This will be the 21st Ashes Test at Trent Bridge since England and Australia drew there in 1899.

It was also the scene of one of the most famous innings in Ashes history when Australia’s Stan McCabe scored 232 there in 1938 – an innings so good Don Bradman, the greatest batsman in Test history, beckoned his team-mates out onto the balcony to watch it.

Bradman, were he still alive, might recognise the pavilion but much else has changed at Trent Bridge, with modernist stands square of the wicket on both sides, floodlights and a giant television screen all helping to bring the ground into the 21st Century.

But some traditional standards remain, with the emphasis at Trent Bridge on spectators coming to enjoy the cricket rather than any other ‘entertainment’.

That explains why Billy ‘the Trumpet’ Cooper, a key figure in the Barmy Army group of England supporters has been banned from playing at the ground.

“I think there has been a lot of emotive language about this whole issue,” Nottinghamshire chief executive Lisa Pursehouse told Talksport Radio.

“The truth is, this is nothing new. Although I’ve only been chief exec for a year, I’ve been at Trent Bridge for about 10 years and the rule was in place then and has not changed at all.

Pursehouse added: “We have a great atmosphere at Trent Bridge. We’re not stuffy or boring or any of those things.

“Our feedback from customer experience is fantastic and people do enjoy coming to Trent Bridge to watch the game.

“We’re an intimate ground and the atmosphere is created by the cricket. That is one of the joys of coming to Trent Bridge, you’re so close to the action, all the stands do that and I have never been at Trent Bridge when it’s been boring, dull or lacking in atmosphere.

“It’s one of those things fundamental to what we offer. There are lots of people who enjoy watching cricket without musical instruments. Trent Bridge offers that, it’s not just Lord’s.”

However, there was a musical interlude when, in a break with standard Test match practice in England, although a common sight in many other sports, the players took the field for the national anthems.

Before play started Australia upheld a 15-year-old ‘tradition’ of their own that sees a former player presenting the cherished ‘Baggy Green’ to a debutant when retired fast bowling great Glenn McGrath handed the cap to teenage spinner Ashton Agar, the spinner playing his first Test at the tender age of 19.

And one far older English ‘tradition’ was observed too. After Trent Bridge was drenched in sunshine on Tuesday’s final practice day, the match started beneath overcast, grey skies.

Mind you those skies has been briefly brightened just moments before when the Red Arrows acrobatic display team flew over Trent Bridge complete with their distinctive red, white and blue vapour trails.
Now the question was would the cricket be as colourful?