Ian Bell insisted his job was far from finished after his third hundred of the series left England well-placed in the fourth Ashes Test against Australia at Chester-le-Street. 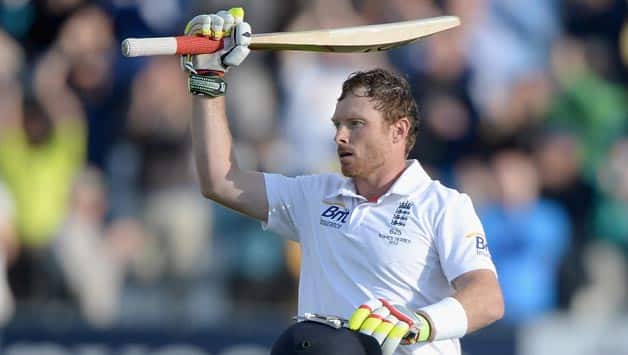 Ian Bell scored his 20th Test hundred on Day Three of the fourth Test at Durham. None of his previous 19 centuries have come in a losing cause for England © Getty Images

Ian Bell insisted his job was far from finished after his third hundred of the series left England well-placed in the fourth Ashes Test against Australia at Chester-le-Street.

England will start Monday’s fourth day on 234 for five in their second innings, a lead of 202 runs, with Bell 105 not out and nightwatchman Tim Bresnan unbeaten on four.

Sunday saw England suffer their latest top-order collapse of this Ashes, with Bell taking guard at 49 for three, a lead of just 17 runs, after Australia fast bowler Ryan Harris‘s treble-strike.

But Bell’s fourth hundred in five Tests against Australia turned the tide for England, who at 2-0 up with two to play had already retained the Ashes.

This was Bell’s 20th Test century in 92 Tests, with none of his 19 previous centuries at this level made in a losing cause (13 wins and six draws).

However, the 31-year-old Warwickshire right-hander refused to take anything for granted.

“Two hundred runs [lead], I’d rather have them on the board than chase them but we’ve seen already with Australia they’ll go all the way,” Bell, who made 109 in both England’s 14-run first Test win at Trent Bridge and their 347-run second Test success at Lord’s, told reporters.

“If we can start getting the lead over 300 I’ll be a little more confident but this Australian team will keep coming and a few of their batsmen are in a bit of form now.

“There certainly is a little bit of uneven bounce. It might do nothing for a while but there will be a decent delivery in there and the skill Ryan Harris has shown is to put enough balls in those right areas and know one ball will do a little bit more or hit a crack and go sideways.”

Bell’s early Test career against Australia was marked by repeated failures against the likes of bowling greats Glenn McGrath and Shane Warne and it was not until both men had retired that he made his first Ashes hundred, with his 115 at Sydney in January 2011 helping England seal a 3-1 series win.

“I believed I was good enough to score Test hundreds against Australia but it took a while,” Bell said.

“I started against one of the best test teams of all-time and that was a real baptism. I learned a hell of a lot from some great players.”

He added: “I’ve had to work really hard this series. I’ve got a lot of respect for this Australian attack.”

Harris, whose 15-Test career has been blighted by injuries, took three wickets for 18 runs in 25 balls as he bowled Joe Root and had both England captain Alastair Cook and Jonathan Trott caught behind.

Instead it was all-rounder Shane Watson who broke down Sunday, the medium-pacer going off with a groin/hip problem.

“When I left the room they were talking about him batting…we don’t know the full extent of the injury,” said Harris.

And with Australia boasting a world-class batsman in captain Michael Clarke, who made 187 in the drawn third Test at Old Trafford, first-innings century-maker Chris Rogers and dynamic opener David Warner, Harris said they were far from out of this match.

“I wouldn’t say it’s slipped away. If we bat well and chase, hopefully, 250 to 300, the wicket is holding together pretty well. I think it’s evenly poised to be honest.”