Pietersen, arguably England’s most talented batsman, was off the field when the side completed a 347-run win over Australia in the second Test at Lord’s on Sunday to take a 2-0 lead in the five-match series. The South Africa-born shotmaker tweeted Monday he was “stuck on a sofa tightly fastened to an ice machine” in a bid to be ready to play at Manchester’s Old Trafford where the third Test starts on August 1.

And Anderson told Sky Sports News: “As far as I know it was a strain so we’ll keep our fingers crossed that he’ll be fine for the Old Trafford Test.

“For him more than most, the next 10 days will be crucial, a lot of rehab and trying to get himself fit for next week — which we’re all hoping he will be.”

There were no such worries for Pietersen’s fellow England batsman Joe Root, who made a commanding 180 in the second innings at Lord’s.

“He’s been amazing,” said Anderson of the 22-year-old Yorkshireman.

“There’s a lot of pressure on this series and for someone so young to take it in his stride, it’s a great credit to him — he seems to thrive off it, almost.

“The way he has dealt with it will stand him in good stead for the future and I’m sure he’s got a big future ahead of him.”

The next Test takes place at Anderson’s Lancashire home ground and he expects the pitch there to be similar to those in the first two Tests, aiding reverse swing and providing plenty of turn for off-spinner Graeme Swann, who took nine wickets at Lord’s.

“I can’t imagine it’ll be too different from what we’ve had in the first two games, so Swanny should be involved at some point,” said Anderson.

“Reverse swing is very common at Old Trafford and it’s very dry, with the weather we’ve been having, so I imagine that’s the same at the moment.

“Obviously I’m delighted to be playing at my home ground, very excited about it,” Anderson added.

“I’ve never played an Ashes Test there, I’ve not played a Test there for maybe three or four years. All my friends and family will be there watching so I can’t wait.” 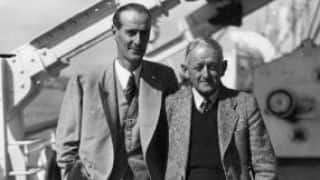