According to McCullum, Warner's standing quietly with folded arms after Root's century was uncalled for.

“David Warner is a fine player, but I was disappointed to see some of the petulance on show in Cardiff. When Joe Root got his hundred, Warner just stood there with his arms folded. There was no applause,” the hard-hitting batsman was quoted as writing in his column on the Daily Mail on Tuesday. ALSO READ: Stuart Broad is back to his best, claims Alastair Cook

“Some of the great Australian players guys like Shane Warne, Ricky Ponting, Adam Gilchrist, Mike Hussey were hard customers on the field. But if you had success against them, they d go out of their way to acknowledge it,” McCullum further added in his column.

Warner and Root have had issues between them in the past, with the two getting involved in a bar-fight in Birmingham during the 2013 Ashes tour. Warner expressed regret over the incident ahead of the first Test. ALSO READ: Australia refused Alastair Cook s invite for a post-match drink, claims James Anderson

England currently lead the five-match Test series 1-0 after a dominating 169-run victory in the first Test at the Sophia Gardens in Cardiff. Joe Root played a central role with the bat, scoring 134 and 60 respectively. Australia were bowled out for 242 on the fourth day after being set a 412-run target, in what was a surprising collapse by the world champions. ALSO READ: Peter Nevill set to replace Brad Haddin for 2nd Ashes 2015 Test at Lord’s 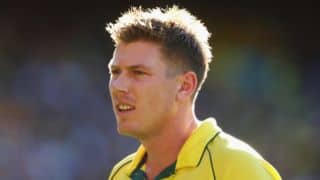