Ian Bell has beenin poor form throughout the summer.

Birmingham: England batsman Ian Bell accepts his form in the “brutal environment” of Test cricket hasn’t been good enough lately but believes a promotion to number three on his home ground will help him come good in the third Ashes Test. England’s most experienced batsman, having made his Test debut 11 years ago, Bell has struggled for runs during the Ashes thus far with scores of one, 60, one and 11 in the first two matches. There had been speculation that, with England repeatedly suffering top-order collapses, Bell might be dropped for the third Test at his Warwickshire home ground starting Wednesday after Australia levelled the five-match series with a crushing 405-run at Lord’s. READ: Ashes 2015: England do not know what sort of pitches they want, says Mitchell Starc

England were skittled out for just 103 in the second innings at Lord’s as Australia won with more than a day to spare. But rather than being dropped, Bell has been promoted to number three in place of the axed Gary Ballance with Jonny Bairstow, averaging over a hundred in the County Championship for Yorkshire, called up into the Test side. READ: Mark Waugh blames James Anderson for England’s loss in 2nd Ashes Test at Lord’s

“It’s a brutal environment you have to perform. I know I haven’t performed to the best of my ability in the last two months….The only thing I can do really is focus on what’s in hand, a home Test match—always great fun, know the ground inside out, I’ve got to enjoy myself,” the 33-year-old Bell told the BBC on Monday.

Bell’s recent performances have revived a longstanding criticism that, for all the technical ability that has yielded over 7,000 Test runs at an average of more than 43 with 22 hundreds, he is rarely a man for a crisis. But Bell, whose 562 runs at an average of 62 played a key role in England’s 2013 home Ashes series win, told Sky Sports of his promotion to number three: “We’ve obviously changed a little bit there, and hopefully it’s an opportunity to go and score some big runs.”

Bell, aiming to become the first Warwickshire batsman to score a Test hundred at Edgbaston, added: “I still believe that when I’m playing at my best I’m a world-class player and I’m desperate for the kind of runs that come with being a top-order player for England, but I’ve known over a long time with England that your job is to score runs.

“I know that I haven’t done that to my capability over the last six or seven Test matches, and hopefully this is the start of me kicking on and going forward again.” READ: Gary Ballance will make England comeback soon: Mark Ramprakash

Meanwhile Joe Root, who made 134 and 60 in England’s 169-run win in the first Test in Cardiff, said that while no-one had a divine right to an England place, Bell was capable of putting his poor run of scores behind him at Edgbaston.

“I think every international player is playing for his place at all times. Obviously some guys are scoring more consistently than others, but Ian’s record is fantastic. He’s playing at his home ground and it’s obviously an Ashes series, which last time it was in England he was outstanding, so I’m sure he will be dying to get back out there and lay a big marker down,” Yorkshire batsman Root told reporters at Edgbaston on Monday.

Australia fast bowler Mitchell Starc was equally conscious of Bell’s proven ability at Test level.  “He’s struggling a little bit, but he’s got a great record on his side and he had a great series against us last time we came over here, so we’re not taking him for granted,” Starc said. READ: Ashes 2015: England have moved on from Lord’s defeat, feels Moeen Ali 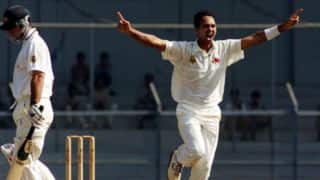 Paras Mhambrey: Pacers must bowl fast even if they leak runs