For the next game, England could now recall Durham fast bowler Mark Wood, who took part in the first two Tests.

Birmingham: England paceman James Anderson hopes to overcome a side injury in time for next month’s fifth and final Ashes Test at The Oval. Anderson, England’s most successful Test bowler with 413 wickets, had to leave the field midway through his ninth over on the second day of the third Test at Edgbaston. He was still off the field on Friday as England completed a remarkable eight-wicket win to go 2-1 up in the five-match series with more than two days to spare. An England and Wales Cricket Board (ECB) statement issued before play on Friday also ruled Anderson out of next week’s fourth Test at Trent Bridge — a ground where he has taken 53 wickets in eight Tests at an average of 19.24. Six of Anderson’s 18 returns of five wickets or more in a Test innings have also come on the Nottingham ground. READ: England promise Joe Root won’t go to ‘Walkabout’ bar

When he saw Anderson struggle before going off the field after pulling out of his action on Thursday, England great Ian Botham said he feared the Lancastrian would miss the rest of the series.  “If it’s an intercostal [muscle], we won’t see him again in this series,” former pace bowling all-rounder Botham said on Sky Sports.  “You can’t sneeze, can’t cough, can’t laugh. You have to let it heal.” But Anderson, who took a personal Ashes best of six for 47 in Australia’s meagre first innings 136 at Edgbaston, was optimistic about his chances of appearing at The Oval, where the fifth Test begins on August 20, because he had not suffered an intercostal injury.

“I’m not going to play the next game unfortunately, but hopefully I’ll be back for the Oval. The medical team were pretty happy with me this morning. They checked me over, looked at my movements and they were happy that it didn’t look too serious. It’s not an intercostal, that’s not the word I heard. It’s a bit sore, I felt something on one of the deliveries,” Anderson told Sky Sports on Friday. England fast bowler Steven Finn took a Test-best six for 79 in Australia’s second innings in what was the man-of-the-match’s first Test appearance since 2013.

It was the first time that two England bowlers had taken six-wicket hauls in the same Ashes Test since Botham and Bob Willis each achieved the feat in the extraordinary ‘500/1 match’ at Headingley in 1981, where England defied the odds to win after following-on. “Finny was fantastic,” said Anderson. “He has been bowling well in the nets and looked like he had never been away. Credit to him because he has worked so hard.”

England could now recall Durham fast bowler Mark Wood, who took part in the first two Ashes Tests but was ruled out with ankle trouble and replaced by Finn at Edgbaston, for the fourth Test.  Other possible replacements for Anderson include Yorkshire’s Liam Plunkett, fit-again Warwickshire seamer Chris Woakes and uncapped Derbyshire left-armer Mark Footitt. 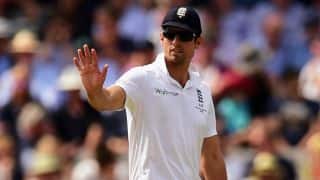 Ashes 2015: Alastair Cook eyes back to back wins