Nottingham: Victory in Nottingham will see England regain the Ashes 2015 and Mick Newell is hoping for a lively pitch similar to the one the teams encountered at Edgbaston. Pitch preparation has been a hot topic this Ashes, amid claims England chiefs deliberately instructed groundsmen to prepare slow surfaces for the first two Tests in a bid to negate the impact of Australia’s fast bowlers. But if this was indeed a tactic, it backfired spectacularly in the second Test at Lord’s where the combination of a slow pitch and a lack of sideways movement favoured Australia, who won the match by 405 runs, as their pacemen are generally quicker through the air than England’s fast bowlers.

Nottinghamshire head groundsman Steve Birks is under particular pressure after last year’s Test pitch at Trent Bridge was officially classed as ‘poor’ by International Cricket Council (ICC) match referee David Boon. Former Australia batsman Boon’s assessment followed a run-glut draw between England and India played out on a slow surface that was heartbreaking for any bowler above medium pace. The Test ran to five days, during which time India scored 457 and 391 for nine declared while England amassed 496 in their only innings — a total of 1,344 runs.

The match also witnessed two 10th-wicket century stands — including Root and James Anderson’s Test-record 198 for England. Newell, however, was optimistic this season’s Test pitch would play very differently indeed. “It’s looking good. The groundsman is preparing the pitch as he always does. I think the main issues are that we want to make sure it has pace, carry and bounce through to the wicket-keeper and the slip fielders are there to take the catches as they come,” he said. 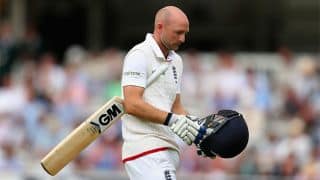