Ashes 2015: The Oval to turn blue for Cricket United charity on Day 3 of 5th Test

Ashes 2015: The Oval to turn blue for Cricket United charity on Day 3 of 5th Test
By CricketCountry Staff

The Oval on Day three of the fifth and final Ashes might turn into a blue sea as the UK’s biggest cricket charity awareness and fundraising that is being organized by the three leading cricket charities: the Lord’s Taverners, Chance to Shine and the PCA Benevolent Fund will happen today and those who are heading to the stadium could show their involvement by wearing something blue. The two teams will also be sporting blue caps or a ‘baggy blue’ with the Cricket United logo on and for the first time in a home international in England, the stumps and bails will also be blue. England vs Australia, The Ashes 2015, Live Cricket Score: 5th Test at The Oval, Day 3

According to a report from Sky Sports, along with the caricatures from Englands Ashes stars of 2005 and 2015 which can be bid on, you can do your bit by texting ‘CRICKET’ to 70123 to donate £5 or you can pay £10 for one of the blue Cricket United caps or £2 for a t-shirt.

England cricketer Joe Root has tweeted about the charity asking the crowd to wear blue:

If you’re at the Oval today make sure you’re in blue! Its our charity @CricketUnited Day so pick up a t-shirt too! pic.twitter.com/y56WgAIecC

The agenda of the charity is to improve lives through cricket. While Lord’s Taverners provide more sporting chances for disadvantaged and disabled young people and spread the power of cricket in schools and communities, PCA Benevolent Fund continue to run a confidential counselling service, providing advice and treatment to players suffering from debilitating issues, either mentally or physically.

Despite losing the 2015 Ashes after four Tests, the Australians seem to take the last laugh as they are on the driving seats scoring a massive first innings score of 481 and an excellent effort with the ball as the hosts are already seven down with just 107 runs on board. READ: Glenn McGrath backs Josh Hazlewood to come good after poor Ashes 2015 series 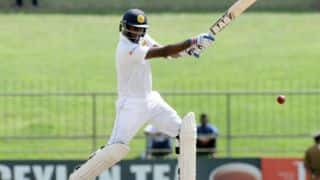