Starc, yet to feature in the Ashes, ended the match 15 minutes before lunch on the third day in Derby with two wickets in two balls.

Mitchell Starc pressed his case for a Ashes berth with a four-wicket haul as Australia completed their preparations for next week’s fourth Test at Old Trafford with a comfortable innings and 54-run win over Derbyshire on Saturday.

Starc, yet to feature in the Ashes, ended the match 15 minutes before lunch on the third day in Derby with two wickets in two balls. He had Hamidullah Qadri caught in the slips by Matthew Wade before clean bowling Dustin Melton.

With Derbyshire paceman Tony Palladino unable to bat because of an ankle injury, the match ended with Derbyshire 112 all out. Left-arm fast bowler Starc finished with figures of 4-39 in 10.4 overs.

Australia came into this three-day game after a stunning one-wicket loss in the third Test at Headingley where England all-rounder Ben Stokes’s superb 135 not out saw the hosts level the five-match series at 1-1.

Derbyshire resumed Saturday on 53-3, 113 runs behind Australia’s first innings 338. Australia opener Marcus Harris was off the field with stomach illness.

After Australia star batsman Steve Smith had made 23 on Friday in his first competitive innings since returning from concussion on Friday, attention turned to Starc.

Australia’s World Cup spearhead could be recalled for the fourth Test, with the pitch at Old Trafford expected to be the quickest of the series.

But it was fellow paceman Michael Neser, uncapped at Test level, who struck first on Saturday when he bowled Alex Hughes for 11 to leave Derbyshire 58-4.

After a brief rain break, fast bowler Peter Siddle — looking to regain his Test place after being omitted at Headingley — had Harvey Hosein (eight) caught behind by diving wicketkeeper Alex Carey, added to the squad for this match to deputise behind the stumps for Tim Paine.

Australia captain Paine was one of several frontline players rested from this match including opening batsman David Warner and the Headingley attack of Pat Cummins, Josh Hazlewood, James Pattinson and off-spinner Nathan Lyon.

Mitchell Marsh, like Starc pushing for his first Test of the series, then took two wickets in three balls to reduce Derbyshire to 99-7.

ALSO READ: Steve Smith falls for 23 on return from concussion

He had left-hander Leus du Plooy, who made 86 in Derbyshire’s first innings, lbw for 37 and then bowled Alfie Gleadall for a second-ball duck.

This was former Australia captain Smith’s first match since being hit on his unprotected neck by a 92 mph bouncer from England fast bowler Jofra Archer in the drawn second Test at Lord’s.

But against Derbyshire he batted with a stem guard neck protector on his helmet despite previously saying he felt uncomfortable using one. The 30-year-old Smith is set to return to Test duty at Old Trafford.

His absence was a blow to Australia at Headingley given Smith’s sparkling form in his first Test series since completing a 12-month ban for his part in a ball-tampering incident in South Africa that cost him the captaincy.

Smith scored two centuries — 144 and 142 — in Australia’s 251-run win in the first Test at Edgbaston and made 92 at Lord’s after retiring hurt on 80 when felled by Archer.

In order to accommodate Smith and Marnus Labuschagne — who has made three successive Test fifties since coming in as a concussion substitute for Smith at Lord’s — in Manchester, Australia may leave out Harris and promote Usman Khawaja to open with Warner.

Both Harris (64) and stand-in skipper Khawaja (72) made fifties in Australia’s innings before they were involved in a mix-up that saw Harris run out. Khawaja averages 96.8 in the seven Test innings in which he has opened. 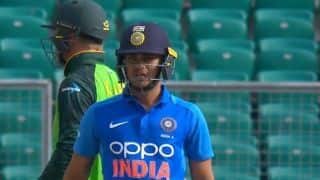