Half-centuries from Head and Labuschagne had enabled the hosts to declare their second innings 467 runs ahead on day 4 of the second Ashes Test in Adelaide.

Adelaide: Australia maintained their firm control on the second Ashes Test, taking out four England wickets before the end of day 4 of the second Test at the Adelaide Oval. After half-centuries from Travis Head and Marnus Labuschagne enabled the hosts to declare with a lead of 467 runs, Australia then took out England’s top four, including captain Joe Root on the final ball of the day to leave the visitors at 82/4 in 43.2 overs. (SCORECARD)

With only the fifth day left, Australia now need six wickets to go 2-0 up in the five-match Test series while England need to bat three sessions to save the match. After setting a target of 468 for England, Australia took only 12 balls to take out the first wicket. Haseeb Hameed fell for a duck, gloving a ball behind to keeper Alex Carey that bounced off a length from Jhye Richardson.

The ideal finish to the day for Australia!

Rory Burns and Dawid Malan survived till tea break and 40 minutes after the interval, Nathan Lyon got one to turn away and take the outer edge of Malan’s bat, to be put down by Steve Smith at first slip. But in the next over, Malan couldn’t make the most of the dropped chance, trapped lbw on the front pad by Michael Neser, and burnt a review as well, ending the 44-run stand for the second wicket.

Burns, looking comfortable for the first time in the series, was given out caught behind against Cameron Green but got to change the decision as the ball flicked his back leg on the way to keeper Alex Carey. But Richardson, who troubled the opener with cross-seam deliveries, came back to take out Burns for a fighting 34, nicking to Smith for a low catch at second slip.

Joe Root and Ben Stokes fought hard to survive till stumps but a blow to the abdomen, where he was hit during the practice session before the start of the day, caused Root a lot of discomfort. After the blow, Root wasn’t moving well and nicked behind to Carey off Starc at the stroke of stumps.

Earlier, Head and Labuschagne notched up half-centuries to help Australia recover from 55/4 to reach 230/9 and swelling the lead beyond 450 in the process. The start of the day wasn’t rosy for the hosts. In an action-packed first session, England bossed the first half while Australia took charge in the second hour.

Australia are six wickets away from going two-nil up in the #Ashes.

Resuming from an overnight score of 54/1, nightwatchman Neser was nearly run out on the first ball of the day. In the next over, Neser was bowled through the gate by James Anderson getting one to jag back in.

England got their second wicket in just three balls as Stuart Broad extracted a thick outside edge from Marcus Harris’ bat and keeper Jos Buttler took a flying one-handed screamer of a catch to his left. Broad almost had Smith dismissed for a golden duck if not for Buttler dropping the catch to his right.

On the very next ball, Broad rapped Smith on the pads, which was adjudged not out. England took the DRS but Smith survived as replays showed impact as umpire’s call. But the Australia captain couldn’t make the most of the twin lives as he gloved behind to a diving Buttler off Robinson.

Head and Labuschagne stitched a counter-attacking partnership for the fifth wicket to ensure Australia didn’t lose any other wicket in a see-saw session. Head was the more aggressive of the two, striking boundaries while Labuschagne took his time to get going.

Post dinner, Head began by smashing past Chris Woakes for four and then pulled for two through mid-wicket to bring up a half-century at his home ground. But in the next over, Head went for a pull against Robinson, only for a brilliant diving effort from Stokes at deep mid-wicket to send the left-hander back to the pavilion.

Labuschagne continued to march and reached his half-century with a single through square-leg off Robinson for the second time in the match. But in the next over, Labuschagne fell as he slog-swept straight to deep mid-wicket off Malan.

An arm ball from Root saw Carey chop onto his stumps. Richardson and Starc slammed a six each but when the duo got out in successive overs, Australia declared their innings for the second time in the match, ending England’s agony on the field, only to pile more pain by the time stumps were called. 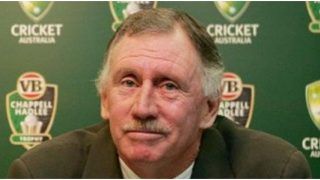 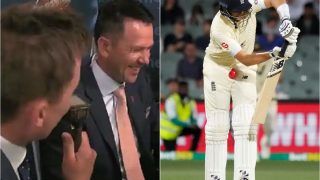