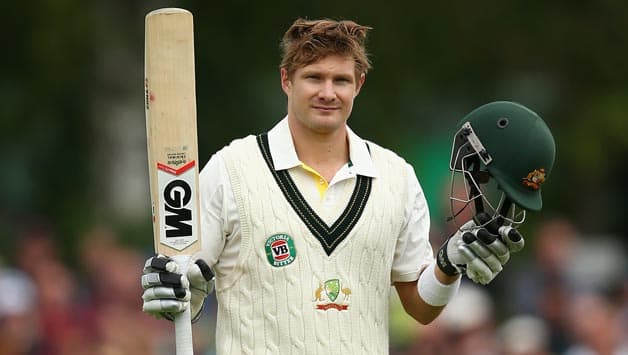 Australia begin their bid to regain the urn from arch-rivals England when the first of five Tests starts at Trent Bridge, Nottingham, on Wednesday.

The tourists’ build-up to the series has been marked by lacklustre on-field performances in the ICC Champions Trophy 2013 and several off-field problems, including David Warner’s bar-room attack on England’s Joe Root, that eventually culminated in coach Mickey Arthur being sacked just 16 days before the Ashes started.

But the fact is Watson has scored just two hundreds in 41 Tests.

Unusually, no sooner have the teams completed their series in England, than they will head to Australia for a return campaign starting in November and former Australia batsman Martyn was in no doubt as to what was at stake for the current team, looking to put the embarrassment of their 4-0 loss in India earlier this year behind them.

“I think these 10 Test matches are a defining moment for him and for a lot of these players in the side,” Martyn told a London news conference on Thursday.

“Watson has played 40 Test matches and at some point you have to start making your mark,” added Martyn, who retired midway through the 2006/07 Ashes having struck 13 hundreds in 67 Tests at an average of 46.37.

Australia’s batsmen have struggled against the swinging ball in recent Ashes contests – and next week’s first Test at Trent Bridge will see England begin a bid to win three straight series against their arch-rivals for the first time since the 1950s.

On current evidence, Australia have just one top-order batsman of proven world-class in captain Michael Clarke, who has been struggling with a longstanding back injury.

But former Australia all-rounder Tom Moody, speaking alongside Martyn, recalled how the 1989 squad of which he was a member had been written off ahead of that year’s Ashes in England only for a team led by Allan Border and featuring the emerging talent of batting great Steve Waugh to triumph 4-0.

Moody said now would be an ideal time for one of Australia’s unheralded batsmen to stamp their authority on an Ashes, just as Waugh did 24 years ago in scoring 506 runs, in a six-match series, at an exceptional average of 126.50.

“There are similarities,” Moody said. “I remember the press conference when we first arrived. A member of the media said to Border: ‘What is it like to captain the worst Australian side ever to hit English shores?’

“The result was 4-0 and it should have been 5-0 if Edgbaston wasn’t washed out. So I think a lot can be learnt from series like that – the unknown can happen in an Ashes series.

“Players, particularly Australia’s batsmen, are going into this series not expecting to score runs. Clarke is, possibly Watson – although he has a lot to prove in Test cricket – maybe this series is the series he stamps himself as a serious Test batsman.”

“And it may also be another player – whether that’s a (Phil) Hughes, an (Usman) Khawaja or a (Steven) Smith or a Warner, whoever it is may do what Steve Waugh did in 1989. No one expected in ’89 that Steve Waugh would dominate and influence the series like he did.”

“I think there is no doubt that Australia can draw parallels with ’89. I am not talking 4-0 but I think Australia have been written off far too early.”