Veteran Indian speedster Ashish Nehra, who called curtains on his illustrious 18-year-long international career in front of an adoring home crowd, has received a warm farewell on the ground and later on Twitter. But the trail of wishes for the pacer is not over yet. Former Pakistan fast-bowler Shoaib Akhtar payed tributes to Nehra on Friday in a heartwarming message by calling him one of the nicest guy.

1 of the nicest guy & honest fast bowler has retired from INTL cricket .A Nehra it was pleasure playing against u #Cheers fella#

Following the tweet of the former right-arm bowler, fans poured wishes on ‘Nehra ji’. The 38-year-old, left arm Indian bowler, called it a day, when the Men in Blue, breaking the Kiwis spell, won their first T20I against New Zealand at the Feroz Shah Kotla stadium on Wednesday. Mates bid adieu to the fast bowling legend and wished for his future endeavors.

Nehra, who remained wicketless in his last international appearance, stated after the match, “I will miss all this. That s what you train for. Like I said earlier, one thing that will be in peace is my body. I really pushed myself. I could have pushed for another two months or years, but who knows you can t get better and bigger than this retiring in blue clothes. It was the right time.” 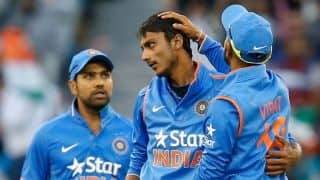