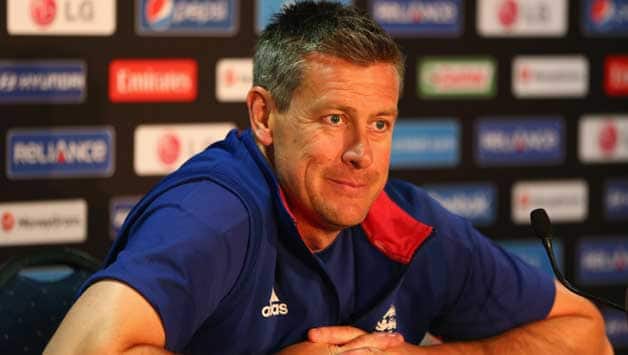 Willis told Sky Sports on Friday that the ball was changed during England’s Champions Trophy defeat by Sri Lanka at The Oval on Thursday because it had been tampered with.

Pakistani umpire Aleem Dar and his New Zealand on-field colleague Billy Bowden ordered one of the balls in use to be changed while the Lankans were batting.

“Let’s not beat about the bush — Aleem Dar is on England’s case. He knows that one individual is scratching the ball for England – who I am not going to name — and that’s why the ball was changed,” Willis said. Read: Willis accuses England of ball tampering

But ex-England spinner Giles, speaking Saturday ahead of his side’s key Champions Trophy match against New Zealand in Cardiff on Sunday, said: “We don’t tamper with the ball. With the situation the other day, the ball was changed because it had gone out of shape. We asked the question, the captain (Alastair Cook) asked that question to the umpires which he has a right to.

“The ball was changed, the rest is history.”

Giles insisted England were achieving reverse-swing — which played an important part in their tournament-opening win over defending champions Australia at Edgbaston — through legal means, highlighting abrasive pitches as a factor.

“The one big thing about this tournament so far particularly at Edgbaston, where we did get reverse-swing, is how dry the squares are… and the amount of wickets that have been cut on those squares.

“And that is the one ground where the ball went around,” said Giles, who like Willis spent most of his career based at the Birmingham venue with Warwickshire.

On Thursday, Sri Lanka were 119 for two at the halfway stage of their reply to England’s seemingly imposing 293 for seven when the ball was changed.

Afterwards, Cook said, “The ball was changed because it was out of shape. The umpires make these decisions and you have to accept them. Sometimes you don’t think they are the right decisions.”

Willis, an England captain in the early 1980s, said: “Have you ever heard about the batting side or the umpire complaining about the shape of the ball?

“How naive does Alastair Cook think we are? He didn’t want the ball changed. So why was it changed?

“It is OK for the ball to scuff through natural wear and tear — but against cricket’s laws to use fingernails or other means to alter its condition,” added former fast bowler Willis, one of only four England cricketers to have taken 300 Test wickets.

Australian umpire Darrell Hair, together with West Indies’ Billy Doctrove, docked Pakistan five runs for ball-tampering during a controversial Test against England at The Oval in 2006.

Pakistan forfeited the match in protest but were subsequently exonerated by the International Cricket Council (ICC) and the fall-out cost Hair his Test career.

However, officials in the England-Sri Lanka match didn’t impose a penalty and the ICC explained, that as the umpires hadn’t reported anything and no team had complained, they were not planning to take any action.

England must beat New Zealand in Cardiff on Sunday to seal a semi-final spot. If they lose they are out and either Australia or Sri Lanka will go through after their match on Monday.

If the England-New Zealand match is a washout they will need a low scoring Australia victory to go through. If both matches are washed out, England will qualify behind New Zealand.