England Twenty20 captain Eoin Morgan, whose last-ball heroics helped the tourists square the series against India, said the victory will boost his team's confidence for the one-day series, which starts after the Christmas and New Year break. 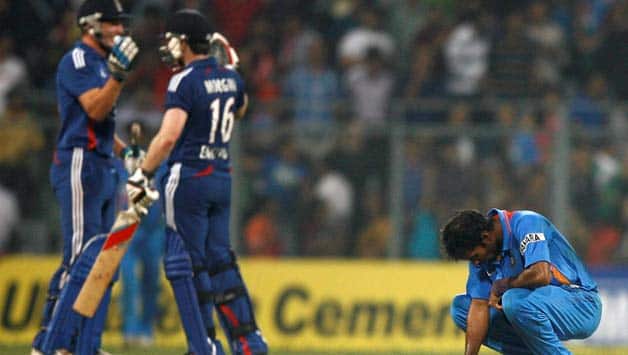 Eoin Morgan, who held his nerves to hit a six off the last ball of Ashok Dinda to see England through, said it was one the best shots he has played under pressure © PTI

England Twenty20 captain Eoin Morgan, whose last-ball heroics helped the tourists square the series against India, said the victory will boost his team’s confidence for the one-day series, which starts after the Christmas and New Year break.

“The young guys who are involved in the one day series will take great confidence from this (victory). I know I certainly will, considering our one-day record over here isn’t fantastic,” Morgan said after the six-wicket win, which was achieved after his last-ball six.

“So, we would like to have the run we have had in the last couple of years under Cookie (Alastair Cook). Then again compete and hopefully win the series,” he told reporters at the post-match conference.

The five-match ODI series commences on January 11 at Rajkot.

Morgan, who held his nerves to hit a six off the last ball of Ashok Dinda to see his team through, said it was one the best shots he has played under pressure.

“It’s certainly up there. There was one against Pakistan a couple of years ago that sailed into the stands as well. But the last ball of the game, and an atmosphere like that, I don’t think so.

“Off the top of my head, this is the first time (we have scored a boundary off the last ball) and what a time, a full house at the Wankhede,” he said.

Asked if he was rattled by Dinda’s tactics to pull out of the stride while bowling the last ball, he said, “It didn’t really bother me. The game was at at a pace where everything was at a snail’s pace.

“I couldn’t blame the tactics, to disrupt the rhythm of the batters. But it does the same thing to a bowler, because he only asks himself more questions.”

He said the win was satisfying after losing the first match by five wickets.

“It is hugely satisfying, especially after the disappointment of losing. To get a satisfaction like this is something different, it is a great feeling. The feeling in the change room while singing the team song was amazing,” Morgan said.

Morgan, who led the team in the absence of regular T20 captain Stuart Broad, said he was impressed with his team’s performance.

“I’m pretty impressed with how the guys held their own.

It’s disappointing not to have won the series expectations are quite high with English cricket, which shows where we are at and where our standards are but to get a draw is a good achievement,” he said.

He admitted that he would have liked to wrap up the match earlier.

“We do test ourselves, and it’s great to get the results and get over the line. Probably liked to finish a bit earlier but played pretty well,” he said.

“The last three or four overs, we just kept saying we are one big over away. They bowled quite well, and the ball stuck in the wicket a wee bit. But we always backed ourselves to clear the ropes.

“When you get that the bowlers are under as much pressure if not more. We needed three off the last ball because you know we could have scampered for two,” he explained.

He praised his team’s fielders and said they made the difference by saving at least 10 runs in the match.

“It was a huge difference. In the game, we saved 10 or 15 runs, which could have cost us massively, and the game was tight enough as it was.

“Fielding is an area of our game that we pride ourselves on. We work really hard on it and we know it can make a difference, whether a catch or a run out our ground filed associates make a huge difference,” he said.