Ashton Agar is in high spirits after taking the wicket of a batsman he has immense respect for.

Ashton Agar says that he is very satisfied after taking the crucial wicket of Virat Kohli. He took this wicket in the second unofficial test match between India A and Australia A in Chennai on Wednesday. This shows his resilience by coming back strongly after a shoulder injury. India A were bowled out for 135 in this match. He also took the wicket of Naman Ojha. Kohli was unable to judge the spinner’s bowling and the ball went past his bat on to his pads before making contact with his willow. This resulted in him getting out ‘leg before wicket’. Kohli got out after scoring 16 runs. ALSO READ: Australia A keen to take on Virat Kohli, says Ashton Agar

He told to WACA, “It was very satisfying to get Virat Kohli out. I look up to him as a batsman. He’s one of my favourite players to watch bat. To get the opportunity to bowl to him was great and to get him out was even better.” Agar now feels that his shoulder is better. Hence, he is very delighted on his return. He now feels that his shoulder is much better. He also felt fluent and was getting through the crease normally.

WA batsman Cameron Bancroft was not out on  24 runs at stump during this match. In the end it can be said that Agar has high regards about Kohli as a batsman and he is one among his list of best batsman currently playing cricket. 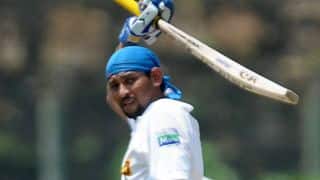