“He is my favourite cricketer of all-time. He looked to hit the ball for six from ball one and probably the most entertaining player to play the game,” Agar praised Sehwag.

The spinner appointed Ricky Ponting as the captain of his side while Tendulkar was picked as number four batsman.

“I’ll have Ricky Ponting at number three and he will be the captain as well. He was always the captain of the great Australian team, so I got to watch as a kid, and he’s probably Australia’s greatest ever batsman,” Agar said.

Middle-order comprised of West Indies’ great batsmen Brian Lara and Vivian Richards. Adam Gilchrist will be keeping wickets in the team. In the bowling department, Rangana Herath and Shane Warne are the two spinners while Shoaib Akhtar and Brett Lee will take control of the pace department.

Agar is currently placed at the fourth spot in the ICC T20I rankings. He displayed terrific bowling skills in the three-match T20I series against South Africa in February.

He picked up five wickets in the first match, including a hat-trick. He followed that up with three scalps in the third and final T20I as Australia secured a 2-1 series victory. 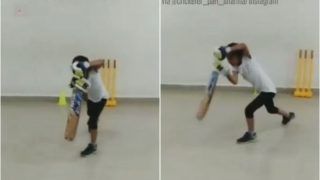 It's Been 13 Years And I'm Still Waiting For a Call From Chennai Super Kings: KKR Skipper Dinesh Karthik