“I think it s really important for me to be able to come in and go from ball one like today, Agar told cricket.com.cu after his four-ball 17 run-knock for Australia A against South Africa A in the ongoing Quadrangular series in India.

This comes after his 34 off 40 in the side’s loss to India A on Thursday. Agar came in with his team reeling at 76 for 5 and went on to top score.

“I worked on that a lot with Middlesex, for the last month I was in the nets working on my six hitting, and to be able to come in and try and finish an innings, said Agar, adding, “For me, it s really important for my batting to be adaptable so then I can be used in any situation. I love batting as much as I love bowling, so I m trying to be as good as I can at everything.”

Australia have been struggling in the ODI format and their recent 0-5 drubbing by England only exacerbates their situation ahead of the 2019 ICC Cricket World Cup to be held in England in May.

“We have the guys capable of hitting those big sixes especially up the order, if (D Arcy) Short s firing, Chris Lynn s fit, Aaron Finch is hitting the ball really cleanly at the moment,” he said. Then it s just about building that depth of power hitting.

“We ve got three or four guys who are excellent at it but I guess it s being able to do that the whole way through, to come in and finish an innings. That s what we can work on,” he added. 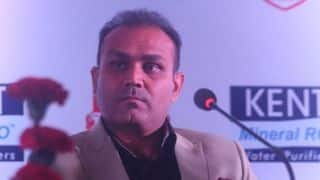