Ashton Agar takes five wickets against India A in Chennai

Ashton Agar takes five wickets against India A in Chennai

Ashton Agar, the Australia A left-arm spinner, has taken five middle-order wickets leave India A tattered after a confident start, in Chennai. The home side looked steady to put up a challenging total after 50 overs, before Agar was introduced to the attack. Mayank Agarwal had been stroking sweet boundaries until then, and looked menacing. Nair was also steady at the other end. But Agar removed Agarwal with a quality delivery that pitched on leg stump and turned to clip the top of off stump, in the 19th over. Then, Kedar Jadhav, the next man in, lobbed gently a full toss on leg stump the first ball he faced, to short midwicket, and departed for a first-ball duck. LIVE UPDATES: India A vs Australia A, 4th match, Triangular Series, Chennai

Nair, soon after, failed to negotiate Agar’s arm-ball and perished lbw, playing off the back foot. A brief stand of 41 between Sanju Samson — the Indian wicketkeeper — and Akshar Patel, ensued, lasting eight overs. Agar was also punished for a couple of boundaries during this period, by Patel. But eventually both fell to Agar trying to smash him into the deep: Samson got a top edge trying to sweep him had, and was caught by James Pattinson at shot fine-leg, and Patel also swept to provide a top-edged lob to deep midwicket.

With six wickets already having fallen, India A will need someone to take responsibility to bat through the rest of the overs. Manish Pandey, who retired hurt on 7, has now come back to do this job. India vs Sri Lanka Test Series: Kumar Sangakkara to get a roaring farewell 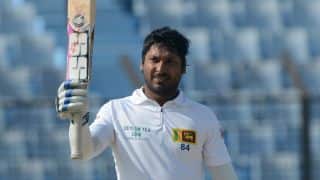