Razzak reflected on his team not posting a 300+ total and praised Kohli and Rahane's diligence.

Bangladesh left-arm spinner Abdur Razzak has conceded that Indian captain Virat Kohli‘s ‘special’ knock of 136 made all the difference in his side’s six-wicket loss in their Asia Cup 2014 campaign opener.

“I would say our bowlers did not do that badly. Nothing went wrong for us. Sometimes some special things happen in the middle and you lose. Virat did just that for India,” Razzak said about Kohli’s 136 which set up India’s successful run chase of 280.

Lavishing praise on Kohli, he said: “He did a fantastic job for his team. They did well with the singles despite putting five fielders inside the circle. Obviously the credit goes to them but we tried our best. Indian batsmen played very well.”

The Bangladesh spinner said they were undone by the heavy dew especially when they were relying on their spinners.

“The biggest problem we faced was the dew. The field was too wet. Maybe after 22-23 overs it started playing the role.It was difficult to hold the ball after 24 overs. Especially for a team like us who are reliant on spinners it was a big worry. But we have no say in this.”

Razzak said they fell short by 20-odd runs as 300 seemed a possibility after his skipper Mushfiqur Rahim‘s (117) sparkling century.

“The way Mushfiqur and Anamul batted at some point we thought we would get to 300. I guess something went wrong down the order. It’s difficult to specify. Maybe six seven balls went the other way… Nowadays, it’s difficult to recover when you fell short.” 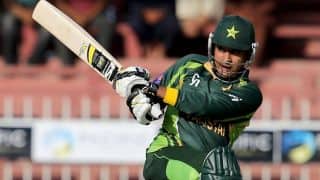