Sourav Ganguly feels that Virat Kohli's absence from the Asia Cup 2018 won't be a concern for India as they are more than capable of holding their own.

Sourav Ganguly feels that Virat Kohli’s absence from the Asia Cup 2018 won’t be a concern for India as they are more than capable of holding their own. Kohli, after a gruelling England tour, was rested for the continental tournament and Rohit Sharma was handed the team captaincy in his place.

“Virat Kohli’s absence won’t be a factor, they are a better side,” Ganguly was quoted as saying by PTI on Monday.

India begin their campaign on Tuesday where they face Hong Kong who made it to the biennial event after beating UAE in the final of qualifiers held in Malaysia earlier this month.

Then they will square off against traditional rivals Pakistan on Wednesday. It will be the first meeting of the two sides since the final of the ICC Champions Trophy in 2017.

As the Indian s team think-tank continues to lock down a pool of players for the 2019 ICC Cricket World Cup in England, stand-in captain Rohit has addressed the middle-order vacancies that have long troubled India and welcomed the return of Ambati Rayudu and Kedar Jadhav as valuable additions.

“There are a lot of spots up for grabs number three, four, six. All these guys are eying for that,” said Rohit. “It’s not settled, obviously. A lot of guys have played in those positions. Going forward, we want everything to be settled but it gives opportunities to the guys to come and play the cricket that they like to play and seal spots.”

Pakistan began their campaign thumping Hong Kong by eight wickets on Sunday while Bangladesh crushed Sri Lanka by 137 runs in the tournament opener on Saturday. 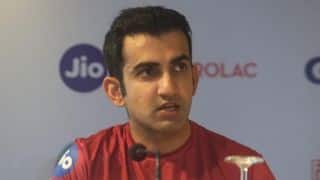